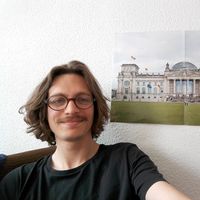 Now:
Living in Berlin for an unkown period; trying to make my own living.
Forgive me my current terrible response rate ! I let my profile active while one million personns were looking for an host in Berlin ^^ . I'll active again the hosting when my roomate will be out of Berlin for a weekend for instance :)

From the last travels:
2019
I traveled almost 3 weeks though Ivory Coast (Côte d'Ivoire) in March, visiting a friend. A unique experience including a 19hours long train to the North, hiking in a primary forest, many moto taxis and uncountable braised chickens with fried bananas !

2017
I traveled from Berlin to Cyprus 3 weeks long in Summer! I went by night trains to Istanbul, then busses and finally a boat (of course!). I made a one day short stop in Bucarest before the final train. The route was declined like: Istanbul-Bursa-Pergamon-Marmaris (short break in Rhodos). And the Kas before 5 days in Cyprus.
I loved discovering Turkey and it's culture and sometimes had very interesting discussions about the current situation.

---
About me
--
I avoid planes during my trips because planes tend to abolish distances: feeling is fully part of my journeys. Let's let planes and airports to boring business travellers. The planet and our climate will be a little better by the way.

" A homing pigeon" like my grand father reminds me :)

I want to try new ways of travel. I want to meet people as well as countries that I visit, like I do in my everyday life abroad in Germany.

I refuse to use Airbnb, because it's a derive of the so called "sharing economy". If nobody has a couch for me, I will rather book a night in a youth hostel :) . Let's meet then in a bar if you have some time and share good tips !

I recently began a vinyl collection with an ambitious goal: gathering one vinyle for each country ! Logically, fleemarkets have become a tradition of the week-end to seek for rarities ;)

More common but still nice, I like cinema, climbing, bike, and politics

A long time ago:

metropolis by Fritz Lang
the meaning of life with Monty Python

Not really "amazing", but maybe one of the most unusual holiday week in my life: a trip into France with a german friend driving a Trabant. If you don't know this car, I recommend you to wath Good Bye Lenin. Driving on the highway, though 100km/h, while hearing to Yann Tiersen, and old east German music was so much fun!

I can recommend you some music tips, especially if you are curious about the so bad labelled "world music" !