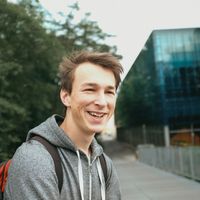 I like sports and games, I used to do aikido, but now I’m more into rock-climbing and Alpine hiking. I have been to several prominent mountain peaks in Europe. I also work as a part-time guide on hikes in the Alps.

I’m really into scouting and traveling and I am happy to unite these two activities together: to travel with scouting.

I’ve been interested in scouting since I was eight years old. I had an exciting time in my scout unit as a child and I still enjoy it now as an adult. I’ve been a leader of a small Boy Scout unit in Pardubice for five years., I’ve taken on various roles and responsibilities while in this position and recently I was the main leader of our scout camp for 50 people. Through this involvement I have been given the opportunity to attend some international scout events in Europe, I’ve been to Central European Jamboree in Slovakia and last year I went to Intercamp in Germany. But I’ve never been to America yet.

I hope I´ll meet new people from foreign countries through this social network.

I always wanted to meet people from different cultures and pleases. I love my city and I love to explain why.

🎶 I mosty listen to rock music but recently I found my self also into elektroswing and jazz: Caravan Palce, Beatles, Red Hot Chilli Peprs, Mucha, Kongos...

📚 I prefer fantasy in literature but I have also read some historic books and poems: Harry Potter, Witcher, Lord of the Rings, Terry Prrachet..

📼 I don't go to cinema that often but if then I don't pick one the commercial trailers. I prefer film with humor and an idea or wisdom.

I have reached many interesting places in Europe by hitchhiking.

I also been to several mountain peeks in Europe.

Czech republick is famous for beer, some sais that it is the best beer 🍻 in the world. When Im on travel I always take some with me.

My greatest hobby is rock climbing so if you want to try it I can share my experiences and my passionateness.