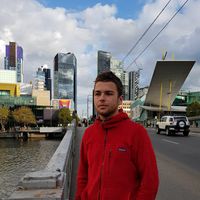 My name's Maxime, I'm19 y/o and I'm from Belgium.
I arrived in Australia 3 months ago, since then i've been visiting several big cities such as Melbourne, Sydney, Brisbane, Bayron Bay and now I'd like to discover Adelaide.
After being graduated from high school I went to Amsterdam to improve my Dutch skills then, I flew to Australia.
I love travelling, it's the most amazing and human experience I had to live.

I met a lot of backpackers during those first 3 months and they've all been using couchsurfing as well as helpx, so I decided to give it a try. I would like to meet australien citizens ( you could think it's weird but as a backpacker, it's rare to have hundreds of opportunities to meet aussie inhabitants, usually I meet/ hang out with foreing people such as brazilian, french, german, italian people ) while travelling this wonderfull country.

I like rap and electro. But I'm very open minded when it comes to listeing to music.
I like watching all kind of movies, more specifically action fims but once again I don't mind watching other styles of movies.

One of my most amazing trip would bewhen I was in the north of Vancouvert Island. I spent 5 days in the middle of nowhere, just with a kayak in order to visit the wildlife around the place we used to be.

I would like to have talks with them, in order to know them a little bit better, share good moments around a coffee/dinner. I would like to share a part of my life with them.