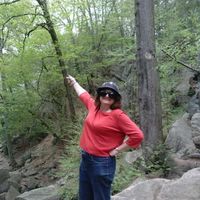 Paul Hossfield and I are a couple of cheerful older folks. He's much more sociable than me. Check out his page as well, and please make your request with both of us.

Paul and I have hosted a number of folks (check out his profile). We don't usually need space when we travel, as we stay with friends or family, but once in a while, we'd like to see what the couch is like from the user's side.

I have 2 part time jobs, one as a librarian in a small, private library. The second is as a stage manager for several local theaters.

I hitchhiked cross country in my teens, and participated in a number of 70's protest marches.

I love to cook, mostly vegetarian. Teach me a recipe.