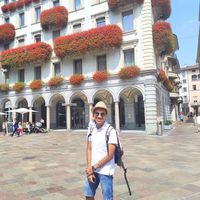 Hi . I m Mehdi from Morocco. i m a computer science and Mathematics student ) . I wanna explore all the world and meet a lot of international people.
I m interested in culture , art, photography , trying something new and explore something stranger.
i want to meet people to get in touch with them and their cities without forgetting their way of living, speding time, seeing life,..

First Reason is to have an idea about the places that worth seeing from the potential host
Meeting new people, create new connections, Hang out, and be hosted by someone to get a general idea of life and tourism in the destination city.

Anything that make me fall in love with it

last summer 2021, I had a very good stay in Europe, I had the chance to stay more Days in Milan-Italy (now I can say that I can freely circle in Milan without getting lost) I visited several places that I have just seen before on my phone screen, the feeling of seeing something that you are accustomed to seeing it just on the WEB and now it is in front of you, really an extraordinary feeling that I can not describe it but also the majority of you will believe.
then i visited VENICE, the historical and romantic paradise of italy after TURIN where there is the royal palace and the egyptian museum, i can say that italy is a moving historical piece, each city has its history, His charm. moreover the final destination in italy was PORTO CERESIO: the small town in the upper north of italy, 1 hour by train from MILAN, this small town there is a gateway to the mountainous parts of italy without forgetting that it is on the borders between Switzerland and Italy. it is characterized by its mountains, its lake and also its colorful environment of roses.
after a few hours in porto ceresio, we took a boat to go to LOGANO (SWISS) eh YES, another History there, a paradise on earth with its architecture and also its lake which is surrounded by mountains and you see the joy on the faces of Swiss people.
the last destination was PARIS: the capital of the Enlightenment, in fact in my first days I was disappointed, I waited more, but after that it was madness, without forgetting the palace of versailles where you will find the king Louis 14 and his family.
frankly it was an extraordinary adventure

I can teach you arabic and also moroccan dialect . And i will be happy to teach you the history of Morocco and especially RABAT . without forgetting the MOROCCAN Cuisine that you will 100% fall in Love with it

we can share our stories, experiences, knowledge and our views