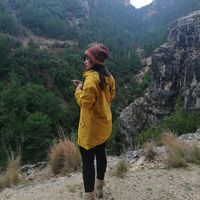 I'm quite easy-going, fun, a travel enthusiast, and a football viewer. You can also follow me in Instagram: mei.saputri. I'd follow you back, for sure but I gotta say I'm not always posting my travel thingy because 92.5% of me is about jokes and memes. Memes save life.

Looking for new friends and hosts with different culture and background and sharing travel experiences.

Movies: All LOTR movies, Sci-fi/superheroes movies (Mind ya, I'm a Marvel fan so I could watch almost all Marvel movies more than twice, the Avengers is the best), adventurous movies (or let say the ones that talk about aliens, eery stuff, and mysterious galaxy and milky way e.g Interstellar), comedy movies/series (Friends, 21 and 22 Jump Street, the Hangover, 3 Idiots, etc), drama and thriller (Not so much but worth mentioning: almost all Liam Neeson movies).

Diving in the first time in Bali, traveling alone in some countries, and meeting up with some amazing online friends/couchsurfing members.

I'm basically an editor who's also passionate about teaching English; In fact, I have also been doing the job since 10 years ago. Besides English, I'm keen on learning other interesting languages like Turkish and Italian since I love Serie-A league and I have been in Turkey four times.