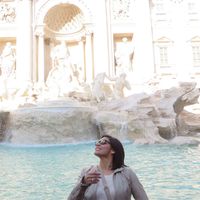 I am pretty easy to talk to and outgoing (although, I am sometimes a bit shy when I first meet people). I really enjoy traveling and meeting local people and other travelers. I try to go on a 3 week international trip at least once a year; for the past few years, I have actually been going on these trips with a friend I met through couchsurfing. For work, I do highway engineering, so I travel all over Texas testing roads and telling people how to fix them. I also studied Italian in college and am still fluent in it but have forgotten some of the grammar.

A friend convinced me to make a profile just before I going on a backpacking trip after graduating college. Honestly, staying at a stranger's place seemed kind of sketchy to me, so I stuck with hostels instead. In Brussels, one of my roommates was from Barcelona, which was the last city I was visiting. I asked him if I could leave my belongings with him on my last day so that I could still roam around the city, but he invited me to stay at his place. I'm glad I accepted because being able to see how locals live in a foreign country was such a unique and great experience. Then, I realized that that was basically the same concept of couchsurfing, so I decided to get active on the site. So far, I have hosted a few people, couchsurfed a couple of times, and have made many friends through couchsurfing. (Btw, I just realized I don't have many reviews because I end up becoming friends with the people on facebook and forget about that part) I would also like to meet people here in Austin. I have lived here for over 10 years now, but my group of friends has become smaller because of people moving away.

I love going to concerts...that's what I do when I'm not working. I consider my hobby to be going to concerts and music festivals. I was lucky to get a music festival passport in 2018 and used it to get both in the US and in Europe. Without meeting other passport holders before, we would coordinate our trips and split lodging for the festivals...it reminded me a bit of couchsurfing. I have gone to acl and sxsw pretty much every year since I moved to Austin in 2008. Some of my favorite bands are minus the bear, phoenix, arcade fire, arctic monkeys, the xx, foals, muse, death cab, tame impala, portugal the man, passion pit, local natives, haim, lana del rey, etc.

I'll go to the movies every now and then, but I don't really have a preference...I'll watch anything. I am definitely more of a series binge watcher than a movie person.

Honestly, I don't read much. I keep an old italian book on my nightstand that I read only when I'm having trouble sleeping...one page and I'm out! Update: To get myself to read, I joined a book club at work, but the other members are a bit older than me so the book selections don't impress me too much...I'm just there for the food and wine

I climbed a volcano in Bali wearing crocs lol