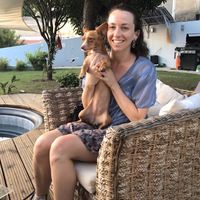 Grew up in LA dancing, doing photography, running, and studying way too much.

Worked in journalism and traveled, then back to LA in 2012.

Since then been working on a novel. I also run my own business.

I met my best friend in Madrid through CS. I've hosted/traveled on airbnb and CS has emerged and faded as part of my life since 2008, but have had some great connections through it. Actually haven't been a CS guest too often (twice in London), haven't hosted much (twice in LA, once in Haiti). Mostly just met cool people through it.

i like independent foreign movies, which i guess aren't 'foreign' depending where you are watching from!

walked down a cliff in the dark.

public transportation in haiti is better than in LA.

I'd love to take you out to eat and clean up the space you've graciously let me borrow so that it's immaculate!