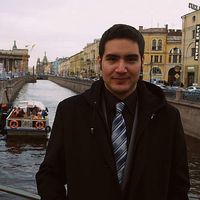 CURRENT MISSION
When I signed up for Couchsurfing 8 years ago I had way different goals then now. The years taught me that the most important thing in life is not travelling, but meeting different people, hearing different stories, as each person in the world is an another story.

But my main goal for many years: Not to regret for the things I haven't done.

Even if I'm going to regret for many, I keep doing the things that I want, and refuse the ones I don't. For all my life I have refused so much; some job offers, some good opportunities, just because I didn't sense so. I didn't feel like I was going to enjoy at all. Maybe it's because of I was born premature - a baby of 8 months, some factory settings of mine were probably not as similar as others.

Everybody has an interest, mine is human mind(psychology and so on) and I claim that Slavonic literature of the golden age is a windows, which lets you see through the human psychology. An insight that is invaluable for people who have been asking the same question, ''Who and why do we want things''.

I live with my feelings and I try not to betray them ever. I've experienced that when I try to fight two sides of mine "feelings" and "the logic", whenever the logic wins, I feel unhappy in the end. That's why, a while ago I stopped making logical things, they somehow do not work for me.

Couchsurfing has allowed me to meet people that I would never be able to meet otherwise. As where I come from, the men here do not have the best reputation in the world, unfortunately, it is sometimes a trouble to even have some small talks with other people.

But when someone is from Couchsurfing community, you can at least figure out that the person is willing to meet and share his culture, and not closing himself to the world, being open-minded and easy going.

In other words, I, for example, studied Russian Literature and Language, along with other slavonic languages, but even though being a professional in Slavonic history and culture, it has always been so hard to meet Slavonic people at first. But the people I had through this community gave me the best friendships and experience. As they had an opportunity to have a picture of me.

I like asking questions. Along with a Bachelor's Degree in Russian Literature and Language, I have another degree, a master degree in Marketing. I have always been asking questionsand getting to know new people calms me somehow. Playing guitar soothes and calms me.

I also have another interest which is losing and gaining weight. Genetically, my family is a baloon - each three years we gain and lose approx. 40kgs. It is unhealthy as hell but whenever something serious happens we find ourselves bulking. Then we lose. Sometimes I get stucked in passport control entering some countries, which generally ends with the question ''Have you lost(or gained) after taking passport picture?''.

I also love self-improvement. I have a quite good CV containing awards and working in different countries, and I continue adding up.

I'm interested in detective novels. Mainly Jean-Christope Grangé or Dan Brown ones. I'm a keen George R. R. Martin reader, I like the world he created and how he plays with words while using English.

For music, I listen to anything that sounds good to me. And unfortunately, there are not many songs like that. I like the voice of female vocals; Anneke van Giersbergen, Amy Lee, Beth Gibbons, Paatos... And being a guitarist, I enjoy the pieces I can play:) Ah, also I'm a big fan of Travis and John Mayer.

For movies, my beloved one is "Once upon a time in America" by Sergio Leone. And Inception is by far the best of my taste for the last couple of years. But I prefer to watch serials instead; Lost, House, Dexter, Mad Men, Breaking Bad, Narcos. But the most striking one in the last year was the German serial D.A.R.K

There are many of them, which can be a topic of my talks if I'm in the mood. Do you have any idea how to survive an old Russian hospital with old, unhappy and constantly yelling nurses? :) Well, I do.