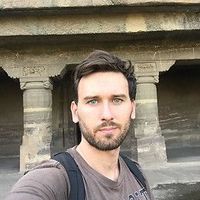 Originally from Liverpool but just now working in academic publishing for a scientific journal in London. Spent ten months studying Applied Ethics in Sweden and the previous year teaching English in Taiwan. Recently been traveling across India, as well as Philippines, Nepal, Thailand and Myanmar .

Have been trying to learn Spanish and also Swedish... but alas with limited success! Spanish - A2/B1 and Swedish - A2 level. Currently hugely interested in learning Sanskrit - both written and verbal.

Hoping to see more of this beautiful planet and meet like-minded CSers :)

Spent a month volunteering to build a school for earthquake victims in Nepal and hiking across the Annapurna, and also managed to squeeze in 7 days on a meditation retreat!

Guitar, Spanish, conversation and a smile :)