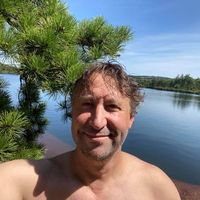 I'm a native New Yorker, whatever that means, having lived in Madhattan since the early 1980s. I've traveled around a lot, but always seem to find my way back home to this crazy island. I love traveling and enjoy meeting and hosting new people.

**I'm able to get BIG DISCOUNTS on lots of shows and other events in the city so if you're interested in seeing something let me know and I'll see if I can hook you up! It's best to send me a 'friend request' via FACEBOOK so that we can chat there in real-time.**

My profile link is:

(IF YOU SEND ME A FRIEND REQUEST then also send me a short message via FB too so that I know who you are. Don't just send me a friend request without a message)

Check out this great short video by the NY Times jf you wanna see a bit about my neighborhood:

Also, check out the link to many of my Favorite Places in NYC (and elsewhere) on my Couchsurfing profile at:

You should DEFINITELY check out and join both Groupon and LivingSocial. They are FREE to join and you can get some Amazing Local Deals there for restaurants, stores, tickets and other stuff that is usually at a 40% to 60% discount. Most smart New Yorkers use these two websites. Plus, they aren't just for NYC. It's worldwide!

Also, check out both the NY Pass and the City Pass, as they offer fairly good deals.

HOWEVER, you should know that entry to Many museums and other attractions in NYC are at a 'suggested donation'. What does that mean? It means that although the stated admission price might be as high as $25 or $30, it's 'suggested' - or 'pay what you wish'. Typically the sales person will not tell you this as of course they want you to pay the full price. You can literally give just $1 (that's what I do) whenever it's a 'suggested donation'. It's actually what most smart New Yorkers do. For more info on this click on the following two links

**IMPORTANT UPDATE** Unfortunately many of the 'Suggested Donation' admissions to NYC Museums have changed. Most are not Suggested Donation only for NYC residents, and students from NY and NJ. Make sure to ask before you pay full price. If you have a valid current student ID, I would recommend you show it and ask if they could let you in for the suggested donation price since you are a student. Hey, it's worth a try!

Unlike London, Paris and other major cities, our subway system runs 24/7. Does it run well? NOPE! But if you wait long enough you'll get home. I always recommend that people get a 1 week unlimited card, even if they are only going to visit for 4 days. It'll pay for itself as you'll definitely be taking the subway to get around like the rest of us. If you are only visiting for 3 days or less then stick with just paying per ride, but for 4 days or longer get a 1 week unlimited for $33. (It's good for busses too - no, not the double-decker tourists busses, just the regular city busses. Why would anyone wanna take one though, as I could walk faster than most NYC busses)

I'm also a freelance writer and big Yelper. You can see some of my stuff at the following two links:

I'm also a big thrifter, and run THRIFTAHOLICS (www.THRIFTAHOLICS.com). I know where the best cheap deals are for just about anything you'd want in NYC.

I also run NYC GRINDHOUSE (www.NYCGRINDHOUSE.com), which is a group of Horror and Grindhouse aficionados. It ain't for the squeamish...

I'm the Director of the NYC International Arabic Language and Culture Social Club (www.NYCALCC.com). I read, write, and speak Modern Standard Arabic and Moroccan colloquial 'Darija' at an advanced intermediate level. My interest in it began while serving overseas as a Peace Corps volunteer in Morocco. I'm very honored to be the first non 'Moroccan of the Month' on Wafin.com (www.wafin.com/mom/67/index.phtml).

I like meeting people from other cultures and sharing in cultural exchange. I feel these experiences make me a more knowledgeable and well-rounded person.

I've hosted over 100 surfers since 2008 when I was first introduced to CS from my good friend Ken Londono. Every CS experience I've had has been wonderful - w/o exception. One good story that sticks in my mind is being thrown out of my favorite bar in Hell's Kitchen, Rudy's, with three Croatian woman who were surfing at my place. The story is too long to type here, but I'll tell you when I see you! As well, getting arrested in Central Park with three Australians, well, that's a winner too. FRIGHTENED, SCARED? Don't worry, you can ask the Aussies or Croats all about me!

I enjoy EVERYTHING and like trying new things. There's so much to do! My big interests include Bicycle Touring (Self-Contained), backpacking, hiking, rock-climbing, and bowling! I recently bowled a perfect game (300)! I like old 80s video games (No One on EARTH can beat me at Spy Hunter) and 70s music and I collect vinyl and have a totally AWESOME old school Lafayette record player and 8-track stereo - bring out the funk!

Far too many to list here. Anything that has 'heart' in it, that has meaning, is creative and humorous.

I've bicycled across the USA twice and Europe once, as well as other smaller trips here in the States. I served two years as an AmeriCorps volunteer, one year with Habitat for Humanity, and worked as an Environmental Educator with the United States Peace Corps in Morocco. I worked with the United Nations here in NYC for five years.

In less than an hour I can teach you how to read and write half the letters of the 28 letter Arabic alphabet!

As an experienced and well-traveled Couchsurfer [and host], I can share some fun and exciting stories, and teach you some dirty words in Arabic! I ain't a very good cook, but I'm damn good at washing dishes. The biggest thing I can share with those that host me is that I can try and host them when they come visit NYC!