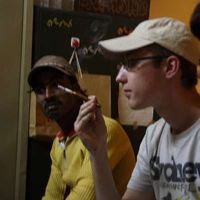 Analytical mind with travelling tendency. There are two version of me: boring employee of a big company and curious explorer-amateur of the world. I do my best to allow the latter to beat the former one :)

I have only surfed so far and never had an opportunity to host anyone, yet.

I haven't had much couchsurfing experience yet but it is changing all the time. I started in September 2013 (why so late!) and have surfed a couple of times since this time. Each one was great, I really enjoyed meeting foreign people and the idea they are sharing part of their lives with me. I look forward to having further, even more pleasant experience.

Explorer-amateur of the South-Eastern Asia countries, active squash player, zealot of bicycle trips with map and compass, advocate of mountain excursion off the beaten track off season.

A couple-of-hours long trip on a roof of the old bus travelling on a meandering narrow road high in the Himalayas.

Me and my girlfriend got lost in the Caucasus Mountains. A one day trail took us three days, we run out of food supplies but finally we got to a village. Not the one we wanted to get to but successfully it was inhabited.

I'm master of Microsoft Excel and VBA and I'm always willing to help in this area but I'm not really sure anybody is going to have some interest in it :)

I'm really open to learn anything new. Last time while surfing I tried juggling and although I had never considered it as an useful skill I really liked it :)