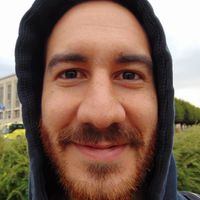 I am a person who follows his passions.

My biggest passion is Science, I recently graduated in Theoretical Physics and I am currently a PhD student in the field of materials science. I am fascinated by the recent discoveries of new materials with unheard-of physical properties, so I am working hard to make one of these discoveries myself.

My second biggest passion is Music. In 2015 I graduated in Saxophone from the Conservatory, until 2017 I was playing as a soloist and in orchestras, but in more recent times music has been only a free-time activity. I listen mainly to Classical and Jazz, but I also like more commercial genres, especially if they have nice texts.

Further passions are languages (I am learning Chinese as my fifth), sports (I have been practicing many of them, but honestly I do not excel in any), and of course travel.

Direct communication with people is the most important thing in my life. It's incredible how each and every conversation can contain such an immense amount of information, emotions, feedback. Scientists say that we communicate much more with our tone of voice and body language than with our words. That is the reason why I am not a big fan of chats and social networks. I am a fan of people, and the biggest overturns in my life, the biggest changes in my ideas and in my plans happened after a conversation in which someone made me see the world from a different point of view. So, no need to say why I love Couchsurfing! It gives me the opportunity to meet, in person, people from all over the world. This is really amazing!

Music? Come on, you already know that from the section "About Me"!

Movies? "The Swedish Theory of Love" is really a great documentary about the Swedish society, made by an Italian director. I watched it for the first time after a year living in Sweden, then I watched it again and again, in several languages. It made me think a lot about Sweden, human societies in general, and about where I would like to live my life. It is extremely interesting and I highly recommend it.

Woody Allen is also a great guy. For sure all of you already know him, but still I mention my favourites here: "Whatever works", "Midnight in Paris", "Manhattan", "To Rome with Love". Never been in New York, I will think a lot about him the first time that I will go to this wonderful city!

Books? I like novels, psychological books, and in general books from which I can learn something. One of my favorites is "1984" by George Orwell, I also like novels and tales by Dostoevsky (now trying to read them in Russian), and I plan to read something by Jordan Peterson. This last guy is a Canadian professor and clinical psychologist, and I really enjoy his lectures on YouTube.

I have been playing the saxophone as a soloist in front of about 5000 people.

Not only nice conversations, but also FOOD! I usually cook Italian food for myself almost every day, but I like to cook even more when I can share my food with someone else and I can learn something new from the food of a different culture. Be prepared to have a very tasty cultural exchange!