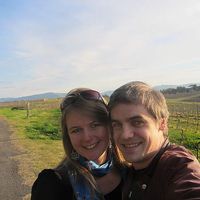 Live my life as I want it to live, whilst caring for others

I'm a Dutchie who is currently living in Brighton (UK) after spending 7 years in Australia. I'm passionate about leaving the world a better place than I found it and focus a lot of my time (in and outside of paid work) on improving life outcomes for disadvantaged people. I'm passionate about dancing, reading, hanging out with friends and learning about the world! I'm a pretty active person, who enjoys quite nights in and big nights out. I like moving around and travelling, although I haven't done that as much as I would like, but he I'm still young :)

"The harder I work the luckier I get" - Thomas Jefferson

You will regret the things you don't do the most.
Don't let fear hold you back from great experiences.
Balance!

I think Couchsurfing is an awesome solution for still sort of feeling like your travelling, while actually being at home. Having people over from different countries and cultures, listening to their stories, it is almost like being on the road yourself (although nothing compares obviously!). I've hosted a fair number of people back in Utrecht and Canberra and surfed myself.

At the moment I really enjoy couchsurfing as a forum to meet new people in new cities. I've met a great bunch of people in Sydney through CS, who definitely made my time in Sydney awesome and the same is happened down in Canberra. Couchsurfers make ever city amazing, no matter where you are.

I'm interested in the problems of the world and how we could solve them (e.g. world food problem, health inequalities, food waste).
I love dancing, especially latin dances and music!
And I love learning about other cultures, especially different native cultures (such as Indians in the USA, Aboriginals in Australia and pacific Islanders..)

I like reading books and watching movies of which I don't really know what's going to happen in them, keeps it surprising and exciting!

I love arthouse movies, Spanish (Almadovar!) and Frenc movies. And basically everything that has Johnny Depp in it (especially when directed by Tim Burton). I also like weird movies, in which you don't really know what's going on, until the complete end.

Robert and I did 7 months long distance, with only skype, calls and texts, after knowing each other for only 7 weeks. It was hard, but definitely worth it :)