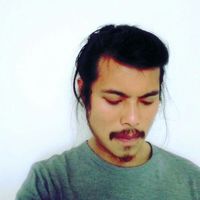 I am originally from Hong Kong, but I have been moving around since 2003. I had failed to call any place my home, through fault of powers or my own; this world of borders confines us in cruel segregation, and I will never be happy staying where I am forced.

I suppose I have come quite far, and if ever I had earned silver or the occasional kiss for the good deeds I did, then the sins I've committed, they are coming for me. I had been brave, to stand where the world happened so the world happened to me; but I'm no braver for there were times I ran where I should have stood.

the ultimate cruelty and kindness of man's society and of nature had taught me the beginning of all I ever need to know. and through all conflicts of ways and philosophy ultimately a person must make their choice in cause and belief, in the end every truth is arbitrary. so after over 13 years of learning, searching, fighting and escaping, I have decided to make every step I take my base, starting with the first home I have had. for what enables the freedom and purpose of mine and of those like me, is to have that freedom and purpose - it drives itself.

I stopped running, I must finish my cause and my novel before chance takes a bad turn or before I do something really stupid... and that, is simply a looming reality. my enemies and my friends are free to find me, hunt me, or help me. I made peace with those years, they and me, brought me here.

inside the decadence and corruption, I do not presume our generation will change the world, but what I know for certain is there are pockets of concentrated goodness and sensibility out there, and we race to outlast apocalypse. maybe then will be a world left for the generation that shall transcend our foolishness and co-operate to explore and find answers to all things.

-earth is moving at thousands of miles per hour and we are standing right on top, start acting like it and live a little faster.
-one of the greatest gift life provides is a means and a destination to escape to. to forever roam along the borderlands where you always have a fresh start, always have a new path and nowhere is a deadend.
-reality is greatly misunderstood, and overrated.
-the world is my home.(Tom Paine?)
-when you set out to find life, life will find you. when you dive into life, life comes to you. and the higher you dive from, the stronger life will meet you, as you would dive from a cliff into water, the impact will be stronger, it may hurt a lot more, but remember always, that you always get deeper this way, into life as if into deeper waters. and a sea's embrace, like its pressure, when it is deep, is always stronger. but if one would know to love life, its embrace is always welcomed. take the first step, let gravity takes care of the rest.
-expect the best, prepare for the worst.(Mao)
-when things go very wrong, close your eyes and laugh to the sky.(Chinese proverb)
-you cannot see the future when you have tears in your eyes.(Navajo proverb)
-we have two ears and one mouth; so listen twice before you speak once.(Epictetus)
-better to tread ten thousand miles of roads than to read ten thousand scrolls of books.(Chinese proverb)
-in places where life has no value, you stop valuing life.
-it's usually good to know yourself.
-live by the code of the warrior.
-your ordinary every day could be an odyssey for someone else.(Taxi driver in China)
-you may be just a drop of water in the ocean, but the ocean will be lesser without you.(Mother Teresa)
-errare humanum est.(Seneca)

in those early days I hosted and surfed, met the closest friends through it and found things I was missing. People come and go, each leaving me a piece to the world's big puzzle; and I long to know everything about this world I live in.

every mind is a vault of knowledge - and I could have them teach me in person. every good one whom i crossed path with had inadvertently shared their longings and hopes and idealism. all of these technology, dreams and wisdom and ideas. imagine if we can combine them.

in here, this far corner as far as any corners of earth, I have an outpost for this collaboration.

Movies: 黄家衛 Wong Kar Wai, Jim Jarmusch, Quentin Tarantino, Woody Allen, José Padilha, Wes Anderson, Andrei Tarkovsky, Alfonso Cuarón, Guy Richie, Richard Linklater, Coen Brothers, Miyazaki Hayao, Stanley Kubrick, Sergio Leone, Jemaine Clement &amp; Taika Waititi, David Ayer. and also a lot of superhero movies, they remind us sometimes we need to be bad-ass motherfuckers, do what is needed and save the day, and I've known many an unsung hero in real life, and if they are not cheered for or rewarded, these movies are the tributes.
Movies I find myself watching most though, are The Godfather, Predestination, The Man From Earth, all reaching 10 times or more

Shows: stylish anime like Samurai Champloo, weird shows like The X-Files, Carnivàle, really well-done ones like The OA, Breaking Bad, excellent documentaries like those written and narrated by Sir David Attenborough, and then the Cosmos. the master-piece thus far in my mind is The Expanse, also Rick &amp; Morty.

-jumped over a 2m wide 3000m deep chasm on a mountain of West China
-lived amongst horse thieves in the mountains of West China
-defended assholes and criminals in court.
-one day when i was smoking in Sierra Leone, a young boy around 10 came up to me asking for a lighter. when i told him children should not be smoking he explained to me he wanted my lighter to light a candle so he can study in the dark. also he told me no one should smoke.
-survived 2 months teaching in a classroom of 200 children in Sierra Leone.
-escaped from death with a 25cent pack of cigarette and an invalid visa© card.
-found a legal NGO in Sierra Leone.
-waking up daily to the sound of prayers from minarets.
-drank clear cold pristine water from mountain streams.
-wandered and partied in abandoned houses, warehouses, villages, factories, amusement parks in many cities.
-blasted by chirps of a thousand birds in Hong Kong.
-taught refugee children in Lebanon of 3 nations, 2 genders, multiple age groups and faith, who all played together every day.
-lived in a community in the mountains of Kosovo.
-the old city of Jerusalem
-witch trial in Sierra Leone
-the mountains of Lebanon
-daily life in a refugee camp in Lebanon
-single parents
-meteor shower
-tropical storm
-mushroom trip
-quit the F'ing corporate world

martial arts, ways of life, spirit of the warrior