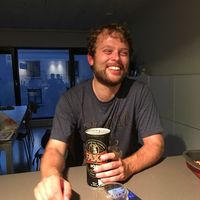 To such great heights

What probably defines me best, is my curiosity to keep learning, experiencing new things. No matter the subject, I'll be all ears in the hope of broadening my knowledge and adding my two cents.
I evidently love to travel. Either by wandering the streets of some unknown city, or by hiking national parks in the great outdoors. Since I started Spanish lessons, I've especially developed a fascination for the Spanish world.

After several years of working in Brussels and living in Leuven, I moved to Gent and am working in Bruges. I like to think I have the best job in the world, but what really makes me happy is just cruising the world's deserted regions, watching their great skies, exploring their hiking trails and last but not least meeting the locals.

I am willing to host, and am always eager to show you around in the city and have a drink with you.

It all started in 2008, in the fair city of Vienna, and it never stopped since.

I've developed an ever increasing interest for social relations. In the end, our ability to talk to each other is what makes humans so unique.

I'm always up for a talk about any topic, preferably with a local beer/wine.

I dig pretty much all music that isn't too commercial.

Movies: evidently, but it's all about tv series these days ;)

Books: if only days had more than 24 hours... Still getting to it, though!

I'm open to learn a bit more about anything that fascinates you.

And sharing is what it's actually about in life. So let's do that plentifully!