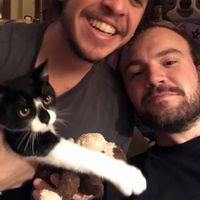 I've been living in Spain for about 10 years now, mainly in Andalucía but with a brief interlude in Bilbao too. Currently cohabiting with my Venezuelan fiancé, who is much cooler than me in every way.

We have a spare room and couchsurfers are buena gente, so why not? Hoping to try travelling with it more in the future too.

Surprisingly enough, I quite like travelling. Also music, cooking, reading, theatre, good wine, cheap wine, and any other wine.

Movies - most of them

Trekking through the Andes to Machu Picchu was pretty cool, or building houses in Guatemala. Oh and I'm in a Frank Turner video for about half a second, so yeah, basically famous.

My brownie recipe will melt your face. Also I can make ashtrays out of cans, which is far more impressive.

I can cook, clean, sew, sing - basically a stubbly Cinderella.