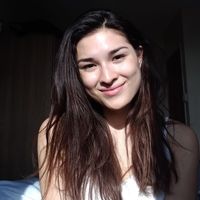 Hi, I'm Milena :) I'm 22, half-Austrian, half Japanese/Brazilian and spent most of my life in Vienna, Austria. I've also lived in England and I just graduated there in International Relations at LSE. Would love to return to university to study Politics/Philosophy at some point in my life. Vegan since 2017 for the animals.

Not using Couchsurfing for dating/hookups :)

I want to learn about the world and what life is like for different people all over the world, and I think doing that through the spirit of hospitality of Couchsurfing as a guest or host is such a beautiful idea! I like 'international atmospheres' in general as I'm mixed race and have lived in different countries

-Jumping off a cliff, then swimming through a canyon to get up close the huge and gorgeous waterfall of Buracao (Brazil)!

- solo travelling and couchsurfing for the first time in Israel 2018

- regularly meditating and seeing how that changed my mind

I think for that it's best to check references by people who have previously hosted me :) I can say that I'm a very calm person and it's important to me to be a respectful, tidy guest. I will bring lots of curiosity about the host's country!