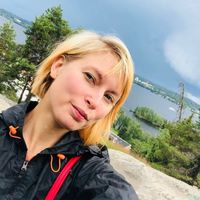 If life feels flat like the earth before it turned out to be 3D start dancing in red traffic lights until you're exhausted, then hitch hike to Africa to see the elephants. And never look back.

I never hitched all the way to Africa, but quite a lot around the globe and pumped into few elephants on my way.
I love dancing, traveling, sports, healthy things, and red wine with dark chocolate..
I tried to be less allergic to some hairy animals, but so far I just avoid them.
Studying/working with dance, sports and Ayurveda.

It's been over a decade since I joined CS and I would never give up the experiences that came with!
Over a decade ago I let the people from all around the world literally crash into my couch and since then I've crashed over around hundred couches, from my own hometown to all around Europe, from Syria to Libanon and India to Nordcape. And I would have never imagined a life so rich and full!
Even met my best friend through CS in a meeting at my hometown!

I remember in 2006 reading a magazine with a story about hospitalityclub.org, where people around the world hosted and got to know other people. And I thought I knew that's what I was going to do!

So it happened that I hitch-hiked the first time in 2007 to a couchsurfing-hospitalityclub meeting with one of the first surfers that stayed in.
And quite soon I started arranging events and hosting in my city.

By 2009 I gave up my belongings and my back bag became my home for some years. I was living in Spain mostly with friends, studying natural healing and arts on my own, hitch-hiking across Europe in the months that even polar bears stay in igloos. I was dumpster diving and eating the healthiest, the most delicious food money cannot buy. I hitched to the heights of Lebanon to meditate in silence for weeks, taught English in Turkey, tried sailing with an old Turkish guy who in the end became too friendly so I left him and pumped into Argentinian tango in the harbor. Tango became my greatest lover, though, we separated when I extended my natural healing studies by drifting into India for 9 months. There, up in Himalayas I became a hermit during the rain season that really taught me what it is to be alive within and after darkness!
I returned to Finland and had a blast with snow, pumped into African dance called kizomba and forgot my romance with Argentinian tango.
I still love traveling. And I did try to make it up to my former lover Tango while in Argentina on 2019.
It just didnt work out anymore. But I do love South America, and living abroad with my all purpose dancing shoes. Though, the past few years I've been busy in the dance circles, I never forget what lead me to there in the first place!

Life is a road that you take. You might plan to go to the right, but instead end up taking the left turn.

Dancing tango in the streets of Canakkale, sleeping beside the highway on a cold winter night during one of the most amazing hitch-hike trips I had so far and waking up at 5am to wash laundry on a Monday morning in India.

In Finland we hunt polar bears for breakfast, eat spit soup for lunch, run around naked in the snow and swim in the ice during the dinner and after that all we go to sauna to fry ourselves with a temperature that a volcano would be jealous and then we go to sleep in our huts filled with mosquitoes. But I never did those, because I´ve been waiting for the right company to make it happen ;)
Welcome to Finland!

I can teach kizomba if you have the patience.
I also have tons of knowledge about health and ayurveda that I can share, but for that amount of information I´d need to move in with you for few years =D