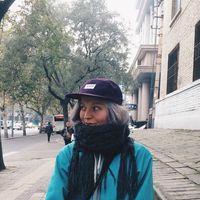 I'm a 23 year-old gal from Finland studying journalism in Tampere. I was born in Helsinki but moved to Rovaniemi, Lapland as a child so I'd say I grew up there.
I started traveling during my gap years and was an au pair in northern Italy. Since then I've enjoyed staying with local hosts and had lots of amazing encounters.
Just meeting up with travelers would be awesome as well. You might catch me anywhere between Helsinki and Lapland!

CS has been a sick tool to travel and helps to get much more out of it! I like to spend time with the people I host/my hosts as much as possible and get to know them. Getting to see the local style of living at it's original source is such a brain food.

I'm into all kinds of sports, basketball, ice-skating and biking to mention a few. Also wondering around nature, hiking and such are close to my heart.

Traveling is something I've really gotten into these past couple of years. A huge factor to it is that I'm really fascinated about other languages and cultures. The longer time you spend somewhere the better you get into the local zone. There's no better feeling than starting to settle in at a foreign city.

Love arts, just unable to do them myself. That makes me appreciate those who can even more.
I study journalism so I'm really into writing and audiovisual media. A dream of mine would someday to be a foreign correspondent.

Movies that trigger me, tickle me, grose me out, make me question all I've ever known and sometimes just dumb shit that makes me laugh. I'm really into true crime and mysteries.

My book preferences are pretty similar with my taste of movies. I like weird, almost grose, educating, thrilling and anything that makes me think differently.