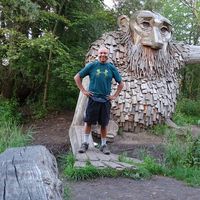 I'm a Industrial engineer from Chile on a year off adventure traveling around Europe. I was living in Copenhagen since February but Now I've left Denmark for good so I'm just traveling around. I'm from the north of Chile in a city called Calama which is in the middle of the Atacama desert.

I never had the chance to travel that much before so I'm taking the chance now to see as much of Europe as possible. since I was little I've always been interested in this old continent because most of the known history happened here and there so many different cultures and languages in a tiny space.

I want to learn about the countries from locals and trying to make great friends, acquaintance and being a host once a I return to Chile. I'm really new to couchsurfing and my experiences in Russia and Ukraine were amazing I'll be forever thankful for the people who hosted me there I honestly didn't expect to enjoy so much those countries. I'm even considering learning Russian or Ukrainian because I'll come back some day and I want to understand more and being able to communicate with non english speakers because in Moscow and st. Petersburg two old ladies talked to me in there trying to explain certain things about certain monuments/places but I didn't understand a thing, unfortunately.

Well I want to connect with people around the world, when I was a child I really liked the song "Quiero tener un millon de amigos" ("I want to have a million friends") by a brazilian singer named Roberto Carlos. In a certain way it's true until this day I want to make friends around the globe and learn about the different cultures and how did you get to be the way you're today.

I want to know locals and their point of view of life, I don't like just to take pictures to show off or to look good. to be honest I take pictures mainly because my parents ask me to send them some haha. But for me more important is the people, having a great company and being able to get along.

Also I'd like to help them on their doubts about Chile and give tips about places to go or avoid. Meeting with them and have a great time. teaching them about the main parts of South american history the feuds between some countries and the origins.

Like I said before I never had much opportunities to travel before so I'm trying to make the most of this time.

I have a broad music taste, I like from some trendy latin songs to metal bands like Helloween or Sonata Arctica.
I like to read mainly fantasy books like "A Song of Ice and Fire", but I'm open to anything that catch my eyes,

Crowdsurfing during Ozzy Osbourne's song "Crazy train" at Copenhell 2018
Ride between 55-85 km on a bike in a daily basis in Copenhagen during a month.

I can help people to improve their Spanish, English or join to some fun activities related sports or anything that's fun!

I am an easy going guy, could help in language exchange and of course tell you about Chile, if you are curious about that. If you need help with something during my stay I would love to contribute.
Join you in any fun activity, help you with any domestic labour (cleaning cooking), having a great conversation, hanging out and I always being with a big smile unless I'm sleeping (I can't control my facial expression while sleeping hahah)