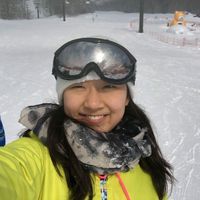 I’m Miya. Currently a final year Master student at Kashiwa in Chiba🥜 🐧🇦🇶🔬🥼
I’ve been living in Tokyo from 2016 to 2018, then I went on an exchange in Zurich for a whole year. That’s when I started couchsurfing!! :D Life is an adventure and I’m on an endless quest. I’ve lived in Beijing for 8 years, Hong Kong for 10, Zurich for 1 and Tokyo for 3.5 so far. Where am I gonna end up later? 🤷🏻‍♀️ maybe 🇦🇶? 😂 just going with the flow :)

I like the concept of sharing without asking for return.
Being a tourist is fun, but not as fun as living the life of a local. I like couchsurfing since it allows me to meet crazy, kind and extraordinary people that I wouldn’t normally meet in a routine life.

Too many...mainly music and sports. I’m also into space, science and spirituality ;) I love crazy talks about aliens and robots and...idk😂 Always up for something new ^^

Music: I love singing and playing guitar, ukulele, piano and flute :) I listen to all types of music in all kinds of languages. Chinese, Cantonese, English, Arabic, Mongolian, Tibetan, French... Singer I like include the Lumineers, AnnenMayKantereit, Radwimps, James Bay, Jason Mraz, Cody Simpson, Queen, Eagles, Bob Marley...
Movies: Into the Wild, Mr Nobody, Forest Gump, The Curious Case of Benjamin Button, Les Choristes...
Books: Three Bodies, Moment in Peking, Twilight (read it 10 times when I was in primary school😂)...

If it’s just one, it’d probably be staying alive and living a life hahaha

Others:
-went to Antarctica and kayaked
-not talking for 10 days during a meditation camp
-Hitchhiking (Switzerland, France, Croatia, Morocco...)
-moving to Japan alone for university
-climed Mount Fuji at night to see the sunrise but the sun didn’t come out and it started to rain -___-
...

Teach: Languages (Mandarin, Cantonese, Japanese, English), guitar and singing, piano, flute, ukulele, taekwondo
Learn: anything that I don’t know :) ...
Share: music (we can form a band haha), food (I like experimenting with my food, but I can cook chinese or Japanese food if u prefer), laughters, stories of our lives, good times ;)

I can cook for/with you if you don’t mind creative experimental food that you might’ve never tasted before😆 (sometimes end up weird lol)
I can sing for you if you have a guitar or ukulele or piano. Or a cup haha
Stories.
Good times.