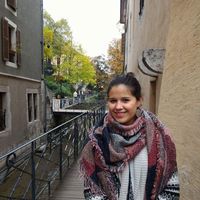 My name is Maria Jose, but abroad everyone call me Meri. I live Cordoba (Spain).

I was interviewed for info about Cordoba, you can get some good recommendations here!: https://youtu.be/iw_aOhzdS18

I’m anesthesiology resident at the hospital of Cordoba. I used to be member of IFMSA-Spain (for people related to medicine). In my free time (I don't have much) I like going out with friends and enjoy the sun at a terrace eating tapas, but I also like staying at home and play board games (Cards agains humanity, Jenga, turn und taxis, Jungle Speed, Alhambra, Pandemia, etc). I love learning new things, as languages!. I've been meeting Erasmus people in my city since the year before I started university and I've done 2 erasmus, therefore I'm super used to international environment and I love it! Nowadays I’m living with 3 erasmus.

I love travelling, but I don’t have as many holidays as I wish :(. I like going out, but I usually don't stay till really late... (some of my friends party will 6a.m. every single weekend, I'm not into that anymore). I don't smoke and I usually don't drink strong alcohol.

I'm open-mind, realistic, responsible, hard working, funny and serious (it depends on the moment). I like languages, in fact, I speak Spanish, English, Italian, French, and German.

In 2011 I worked as a volunteer in Switzerland. I really liked that experience and I've gone back for 5 summers, 2015 was my fifth summer. I did my second erasmus in Switzerland as well. I'm in love with this country!: cheese and chocolate yummy!!

Some of my friends think that I'm crazy because of using this platform, they don't know what they're missing!

PHILOSOPHY
Shared economy is the future.

I like CS, It's nice to meet people in a completely unknown city for me and do some city seeing, chill out and go party.

I host anytime I have the opportunity, I hope to receive the same hospitality, but so far it has been very hard to find a host.

2018
- I traveled with 3 friends to Fez and met two CS locals from there, they were SUPER nice to us!!

2017
- I traveled with 2 friends to Marrakech and were hosted there. It was such a nice stay, we really liked our host.

2016
- I traveled with 2 friends to Sweden and were hosted in Gothenburg for 2 nights.
- I hosted in Copenhagen one girl from Switzerland and another from USA
- I Showed Cordoba to a Finish-Dutch couple
- I traveled with 2 friends to Czech republic and were hosted in Brno. Such a nice experience!
- I met a local from Bucharest when I visited the city. She came another weekend to my city to visit it.

2014
I've showed my city to 2 CSfers: from France and from Kuala Lumpur.

2013
I met several CSfers in Athens
I was hosted in Rome. First experience as guest and it was super nice!.
I met two Csfers in Innsbruck, we went to the beach.

When I have free time I hang out with surfers and I show them Cordoba ;)

Travelling - In the sense of getting to know different cultures, languages and points of view. I also like city seeing but only the most important places (I'm not the person who visit ALL churches and museums that there're in the city). I like doing free walking tours.

Languages - I love meeting people from other countries and practising other languages!! I can teach you some Spanish if you want.

Movies - I love action and comedy films, as In time, Hangover and American Movie.

Music - Nearly all kinds, specially the music you can listen to in the radio or the disco. I usually don't remember the artist or the title of the song.

Books - I don't read as much as I'd like to 'cause I've many things to study for work.

I traveled more than 5000 km by car during my erasmus. I've slept in many several airports. I bought a flight for 1€.

In summer 2012 I was volunteer in Schwarzsee (Switzerland). To go to the working place I had to go up a very steep stair of 144 steps and I was carrying a baggage of 22 kg, a hand baggage of 10 kg and a school-bag... Imagine my face