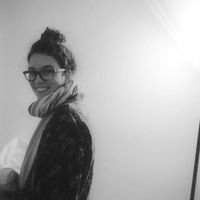 I go to seek a great perhaps. (Last words of François Rabelais)

May the adventure never cease.
(as read on some rocks on a hill in australia)

"..what it comes down to is mattering to the people that matter to you."

I met a lot of interesting and fun CSers around the world - and decided to join the network myself..!

Music (although not very musically talented, I would be the kid with the triangle in an orchestra..)
Space, Deep Sea, Fishes, Art, Ghost Towns, Ethnology...

If you need a concert-buddy, ask me.
Concerts are my favourite thing! :)

MOVIES
Everything but horror movies..

Swimming in an abandoned pool in the rainforest of malaysia,
Living in a van with 4 amazing people,
Diving with Whalesharks!
And last but not least: built a raft and lived on it for a week whilst floating down a river.

Did my final work (highschool) on the topic of the garbage patch. So if you're interested in that I could tell you something about it..
Update 2019: studied anthropology at uni, now doing my masters in European Global Studies!
I would be happy to share my knowledge of any language I speak with CSers.

The list of things I would like to learn is long, but on top there is skating,building a raft, surfing or anything you know about life and space related things.
Update 2019: Started to learn how to skate, built a raft and tried to surf multiple times - Keep working on your dreams, and keep dreaming! :)