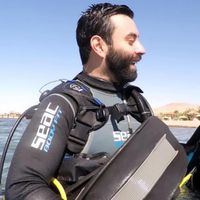 My name is Mohammad M. Jamous and I was born in Jerusalem over 32 years ago. I'm an activist and Palestinian peacemaker living in Ramallah, Palestine.

I studied Business Administration at Al-Quds Open University in Jericho and am now completing a master's degree in International Law &amp; Diplomacy at the Arab American University in Ramallah.

I write simply to share my story as palestenian peacemaker who brings thousands of Arabs and Jews together each year.

As a key representative of the non-profit interfaith organization, The Abrahamic Reunion, I coordinate peace journeys, cross-border programs, and intra-Palestine think tanks in a tireless effort to build a real sustainable movement for peace across the region.

I also work for other interfaith peace organizations in Israel/Palestine, such as The Home (or הבית), which has the unique aim of developing deep friendships between Israelis &amp; Palestinians, so we can finally fight together for a peaceful and prosperous Israel/Palestine.

i'm holding monthly multi religious programs related to youth , families and clergy of different religions .
and changing the misconception about the israeli-palestenian conflict
believing that it is important for students and professors to learn about both sides forging peace rather than condemning or erasing the history of races

I aim to change the misconceptions about the Israel-Palestine conflict with the stern belief that it's essential for students on both sides of the border to learn about the traumas and triumphs of both peoples, as well as, both side's contributions to this ancient strife. Over the last five years, I have had the privilege of giving a variety of lectures at conferences &amp; parliaments related to Israel/Palestine, peace building, and the need to unite the religions of the world.

I have participated in many conferences and parliaments aimed at building peace building in the world through the principle of dialogue among the world's religions, including Canada, America, Italy and France

I have been imprisoned twice for my activism but this does not deter me. I have one mission. Peace.

Peace be upon you,
Mohamad

I believe that my education, language skills and work experience meet the mandatory criteria and qualifications for host people and meet new cultures .

Education – I received a Bachelor of Administrative and Economic Sciences degree, with a specialization in Business Administration from Al-Quds Open University in 2017. I believe this meets the requirement for a post-secondary degree from a recognized post-secondary institution.

Experience – As the Palestinian Director of the Abrahamic Reunion, I have extensive and varied experiences in providing services to clients and to working with external individuals, officials, religious leaders, businesses and organizations. In order to organize and coordinate successful events, I regularly and effectively work with stakeholders from every religion, culture, nationality, type of organization in the Holy Land.
My duties as Palestinian Director include tasks that an administrative assistant might do in an international organization. I am comfortable using Microsoft Office, the Internet, Zoom, email and social media. I pay vendors, submit receipts, prepare written reports, schedule meetings, compile survey responses, communicate by phone and in-person with co-workers and outside contacts.
Asset Qualifications

• Experience in collaborating with representatives of local authorities: One example of this is when I organized an Interfaith March for Peace &amp; Justice, I had to go to police headquarters and meet with the police director in order to get the proper permissions and clearances to hold this event in Bethlehem. The police director not only granted permission, he offered to have some of his police officers provide security for the event. Religious authorities were also contacted and agreed to participate, e.g., the priest of the Greek Orthodox Catholic Church in Zababdeh.

I can share about the Palestinian cultures ,and my work as a peacemaker and all the challenges that I have faced