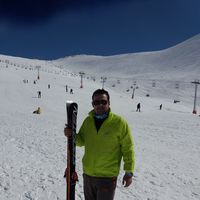 I Like to travel since it helps me become familiar with various people around the world. I like to help others to do the same.

I believe that travelling enables us to know ourselves better. It opens our eyes. It shows us how we behave in different situations.

I think the best way to visit a country is with a native who will be able to show you what the culture is really like, tourist companies that don´t show things the way they are!

I'm on CS to get to know locals in the countries and cities where I travel to and to learn about their lifestyles. I think locals might have the best advice where to go, what to do and how to behave.

These two sentences make me to like travelling and hanging out, eating, dancing, holding and going to the parties with people, especially with new ones :)

Sometimes, thinking about the life and reviewing the story of my life is another major interest.

I have worked in some Ghalamzani workshops in Isfahan in my childhood for some years... Google "Ghalamzani" :) I have put an object decorated by Ghalamzani in the pictures of my CS profile.

I can teach:
- Iranian modern handicrafts
- How to cook some Iranian foods :p
- Strategy

- Iranian traditional foods :) I can cook some especial Iranian local foods :) you can't miss ESHKENEH, KOLAJOOSH, DIZI and so on ;)
- Playing and maybe singing some Iranian musics.
- Hanging out and showing some especial places.
- Some jokes and experiences is a plus:P