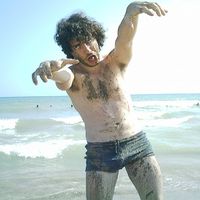 Add my contribution to make this small world even tinier

[PLEASE READ COUCH INFORMATION SECTION BEFORE SENDING A COUCH REQUEST]
I play piano, guitar, synth and "elephant-trumpet" (and soon berimbao). I play them in a band, VoYaGER (real name, not a fake!) since 1997 (something borrowed and/or stolen from Zappa, Mr.Bungle, Gong and Mariposa) but I studied History of Music, so I'm officially more involved in opera/classic than rock or jazz.
I just beginned some Capoeira courses... for those "poverini" who do not know it, it's a brazilian martial art: something between a dance, a game and a fight in which rythm is everything. Which best metaphor for sex????
PRESS SAID ABOUT HIM:
"You're prettier than it looks like in those CS photos" - Mavì. [Thanks Mavì here's your 10 euros]

HERE'S WHAT A TEST SAYS:

MY RISK! ARMY (places I conquered by having been):

1st of all fight to abolish bad speaking like "personal philosophy" and such stuff...
Anyway, I found a quote in Nicolas' profile: "Travel is fatal to prejudice, bigotry, and narrow-mindedness, and many of our people need it sorely on these accounts. Broad, wholesome, charitable views of men and things cannot be acquired by vegetating in one little corner of the earth all one's lifetime." ~Mark Twain

Just organizing local CS for the Ferrara Buskers Festival - Host as many people as possible and stuck CSers.
Last but not least, by hosting and being hosted, I distribute to you a H-Number equal to 1. The "H-Number" is the degree of couch separation between any guy in this world and me (i.e. "H"), something similar to the "Erdős Number" or the "Bacon number". From me you receive the power and honour to award other CSers with a H-Number = 2, so they can distribute a H-Number = 3 and so on. You may somewhat calculate your H-Number by clicking the "how do I know Monamipierrot" button left, counting the number of people between us and adding 1. E.g., Casey Fenton, who knows Gregoire (H-Number = 1), has a H-Number = 2.
Please be wise in distributing H-Numbers.

Music, cinema, opera, literature, languages (above all, Catalan and Occitan), the country you're from, open software, open networks, open lifestyles, re-re-re lifestyle, sciences, history, geography, anthropology, sailing, nature, acoustics, typography, cultures, politics, videogames, where the hell is now the I-swear-it-was-here-and-can't- have-just-disappeared blue pen and all these sort of things everyone is interested in. Uh, and understand gossip.
Additionally: who are these people today visited my page:
Create your own visitor map!

(Important: I HATE "MATRIX" and I'm between the very few who hated it from the beginning. If you are one of the billions of Matrix fans, please understand this and don't make me explain you why it is a very stupid movie, there are big chances I could destroy your myth and convince you. If you feel happy, you may not want this.)

The 3 basic things you should do in your country too:
1. Phisically destroy a car with clubs and in other, different and fantasious ways
2. Intentionally pull a train's Don't-pull-this-thing-it's-a-emergency-brake
3. open the mouth wide and insert the whole face in a giant extra-white extra-cream cake pie
You didn't do all this things - you didn't really live.

Teaching is learning. Learning is teaching. Cheating is earn... ehm, sorry, I was trying to explain my philosophy of sharing, but anyway I'll try a distinction:
I want to learn (in this order): german (deutsch), capoeira, everything about opera, classic/contemporary music, jazz, berimbao, trumpet, advanced LaTeX, fractal mathematics, portoguese, japanese, arabic,
chinese, occitan, all languages.
I can teach: italian (not a joke, I think I can manage teaching languages), everything I know about opera/classical music by go to concerts, languages I know (spanish and catalan, 1st of all)....