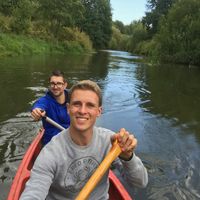 Aloha, I am a passionate traveler (like probably anyone on this platform) and I am taking a gap year in between studies atm. I‘ll probably start a Masters degree in Impact Entrepreneurship in Portugal soon.

Music / Literally anything other than German folk music. Heavily depends on my mood.
Movies / Am not good at watching movies but of so, Animations are definitely the thing.
Books / On self-development or spirituality.

/ Spent 10 days with Monks on a silent meditation retreat.
/ Roadtripped through 24 countries while living in a car and surving on only 11€/day.
/ Got stuck in Australia during the pandemic.
/ Helped a quarter million people getting their vaccine.
/ Lived in a tent in someone’s backyard in Downtown Toronto.
/ Quit my job above the clouds in Vancouver to spontaneously fly to Costa Rica and crash a rental car.
/ Somehow booked and boarded a flight to an island while being drunk and not realising any of it until waking up on the plane itself.