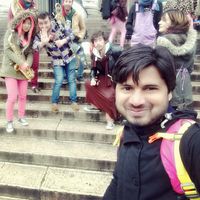 World is too small, out of 196 countries 23 have visited, just 173 are left, My sixth sense always says to me, I can't die until I visit 🌍
Muhammad Ilyas has earned Master’s and M. Phil degree in Mass Communication from Government College University Faisalabad. Ilyas now running a tourism company with the title of Travel Studio 92 while having a purpose to promote tourism in Pakistan at international level. In this contrast, Ilyas have welcome many foreigners around the world to Pakistan.
Previously, Ilyas has worked in London, United Kingdom as a receptionist, where there he has met with more than 100 countries of people and learned about their culture and norms. Ilyas recently has visited about 20 countries of the world, including, France, Germany, Belgium, Portugal, Turkey, Norway , Czech Republic, Italy, Albania, Greece, Switzerland, Spain, Malta Holland and Denmark, where there he has great exposure &amp; learnt lots of things.
I love to meet new people and learn their culture and traditions. So after visiting 23 countries I decided I will use couchsurfing to get more in depth with other countries' culture and will have more new friends.
My next destinations are Qatar, Saudia Arabia and Dubai. Hopefully till 29th November I will be in Qatar. Let's see who gonna host me 🥰

As travelling is my passion so Couchsurfing is the best place which not only reduce my expenses while travelling but also it will give me an opportunity to meet different people and know their norms &amp; culture.

I call myself nomad, so a now nomad always move place to an other which is called traveling, so definitely in this journey of nomad he meets with new people and always make new friends.