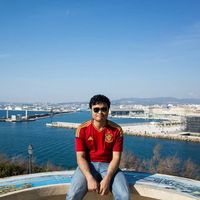 There's nothing much to talk about myself as I'm not really great writer nor a speaker. Though, I prefer showing you who I am haha.

Okay I'll talk. I am currently working as a project engineer in the countryside of Kedah, Malaysia and have been itching to travel, soaking in the foreign cultures and meeting new people along the way and what else is the best way to meet up other than using Couchsurfing ( I know there are more ways of meeting people but my point still stand). I wanna meet people and be hosted and try new things. So even if you cant host me, I would very like to meet you somewhere in your hometown or if you're coming to my place, please message me. I am working right now and still waiting for the right 'fuck-it' time and just go travelling the world.

The first time I heard of couchsurfing is when I surfed reddit, and read this one guy AMA (Ask Me Anything) about how he travels the world with only a budget of $10 a day which is pretty crazy if you're living in expensive country i.e UK so reading more into his thread and I stumbled upon something that is Couchsurfing. "Nice, what's that?" I told myself and fast forward to three hours later, I am doing my first log in into the Couchsurfing community and I have been loving every second of it since.

Gaming, particularly PC gaming although as of right now, I don't have any gaming PC except for moderate spec gaming laptop.

Meeting people, I love meeting new people despite if you have the pleasure of meeting me, you might be annoyed by how quiet I am, although I can assure you that I'm really enjoying the meeting and I'm really trying to change that haha

Photography, street photography is my main interest. Not so good at it, as in NOT good at all but not everyone was born with talent so I don't care much.

Travel, solo travel is something that I want to try since a long time. Have done it once and been itching to do it again ever since. So any solo traveler, wanna meet up, let me know.

I am still trying to get into music as I listened to a lot of music but never try to play them. This time around, I want to venture into piano. Let's see how that goes :) EDIT: As of now, the piano venture was going bad as I'm being too lazy. Let's hope that summertime will change the notion of it.

Overall I'm pretty much a textbook nerd though I'm trying to expand my interests.

Books - I do not read much but I do like the Hannibal series, Game of Thrones (Only read the first two) some Stephen King books, Gone Girl ( the movie is great too)

Music - All kind really, some modern stuffs like techno but I'm still more of the old school stuffs but not too old school (I just sound like a YouTube commenter now aren't I?).

I solo travel to Koln (yeay!) despite it being only for 4 days. I want to solo travel to Japan for 2 1/2 months this September so if I successfully done that, then that is gonna be another of the bulletpoint for my amazing thing. UPDATE: I didn't manage to do 2/12 months in Japan as planned before but I have done something better (imho), 4 straight months in Europe with a sprinkle of Lisbon-Porto hitchhiking and Porto/Lisbon hostel/farm volunteering which is awesome!

Also, bungee jumping in Brasov and cave diving in Budapest.

I also volunteered for one month in a place deep in the jungle in Raub, Pahang to help rehabilitate gibbons who were once part of illegal pet trade to become one with the wild again. This was with Gibbon Rehabilitation Project (GReP, they're amazing btw, check them out!).

Gaming, I'm into gaming that you can play games here in my house. I don't play FIFA that much though so bear with me on that

Movies, let's just talk movies, I love movies and if you're a movie buff just like me, we are gonna have so much good time I hope.

I am also really keen to learn more about yourself so tell me more if you will.