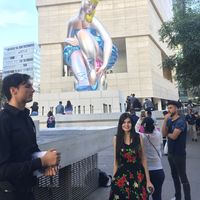 I could describe myself as an easygoing person that loves living life and learning something different each day. I like to meet new people and try new things, not a lot more that I can say without getting into specifics, but I do certainly love CS mission.

As of now, I haven't had a lot of opportunity with CS due to lots of work but I am interested on keeping it going.

I've had a couple of CS experiences which have been really awesome and I'm planning on getting a lot more as time goes by.

I like films and music, hanging out and reading, pretty generic to be honest, and I like trying new stuff also.