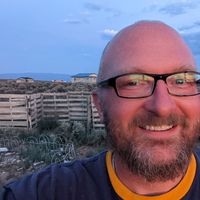 I've been performing stand-up comedy across the country since 2001.

Currently living off the grid in Taos County, New Mexico about a 35 minute drive from Taos on the high desert West mesa in "Carson Estates". I have a Schoolie (with a couple beds, electricity, propane stove, sink and wood burning stove), a short bus and another camper, a couple outhouses and sheds plus a pit garden wallapini. I'm building a weird comedy compound.

I've got solar power and will be building wind turbines to augment that eventually. Beginning spring 2023 we will be building a cistern and shower house, a traditional Adobe structure, and various Earthship-inspired structures using thermal mass, passive solar and rainwater collecting roofs out of pounded earth tires and styrofoam-infused aircrete. Wanna help?

Come on by and stay as long as you want. Glad to have you. I've surrounded myself with cool people who are super fun with hearts full of joy and zero hate. Is that you? You're welcome here.

I have used Couchsurfing for about a decade to find places to crash as I tour the USA and I have made my home available to travelers for years. I appreciate it when others do the same for me. This is super fun.

A comedy show I produce - #BrokenRecordShow - broke the guinness world record for "longest standup comedy show, multiple comedians" in 2015 (184+ hours) and we do it again and break our own record every year by 5 minutes. It's ridiculous.

what's mine is yours

I homebrew biodiesel, kombucha, beer. I garden. Rehabilitate wild squirrels, ducks. I'm a computer nerd, video editor, photoshop goober, gamer, livestreamer. Whenever I can, I'll go to parks and run around catching Pokemon. It's dumb but fun. I'm happy to do any of that stuff with you or talk about anything / everything / nothing.