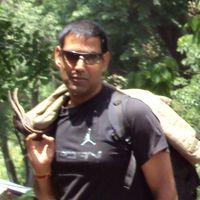 Well Educated, Spritual and a Free Spirit Dom with Warmth

My HOME is exactly as it is in the pics here (including the Balcony view) and happens to be bang in the centre of the Delhi Metropolis as it has become today. Despite that it is an island of serenity and NO-NOISE (unthinkable because in Dellhi very few houses/areas are without the traffic noise coming into houses all the time) And all the happening places of Delhi are nearby. It is NOT IN THE SUBURBS ! I have heard of poor couchsurfers getting stuck in suburbs or corners of the city because tney were misinformed or because they were not informed.. rest please see home section.

I stand up for my friends, even if I am the only one standing beside.

"And those who were seen dancing were thought to be insane by those who could not hear the music" - Nietzsche.

When I was in school &amp; college, the family had limited means.., but my spirit wanted to explore the world...

so in those days would plan n make my trips in such a manner so as to be able to stay with friends/relatives/their friends n relatives for 80% of my stay...

I got hooked onto that kind of travelling... I had experiences &amp; insights into the culture/place that big time spenders had no idea about... they simply missed the culture/city most of the times... &amp; I was like so full of numerous experiences n exposure to the place &amp; culture..

Also in the same spirit used to host friend's friends wherever I was staying... &amp; have been doing so since years...

Well.. had been hearing about couchsurfing for a very long time...&amp; was impressed by this wonderful idea..

After years of thinking of joining it, finally had the time today to sit down &amp; join... :)

Travelling, Sprituality, Dom with Warmth , interacting &amp; learning diffrent cultures &amp; the ever going changes in each culture/society /country. .. observing the incredible human spirit- its strengths &amp; frailities...( the will to live "life"..) ,

Helping cow shelters with my energies &amp; the little means I have..., exploring sprituality.. (yes we are all 'only' learners in sprituality..each time a new dimension opens, one realises how little was learned before..) yoga (the simplest kind to keep one invigorated )

Rally driving,
also picking up my big sturdy 4 Wheels drive SUV &amp; just hitting the road to explore mountains that start 4 hours away..to explore a new road I had heard about,....an old temple nestling in mother nature's lap (had heard of but never been to..) or a new valley I heard is beautiful n welcoming (or maybe not so welcoming a valley..but is rather a challenging one. .)
or maybe just to drive on my favorite road once again with nice music...

Chai, beer
n lazy banter (of the positive kind only)

Pulling friends legs n allowing them to pull mine in the same spirit.. (oh my DNA came from haryana-punjab flood plains... &amp; the sense of humour of people of this area is the ultimate on the planet..;) ,

Music- so many &amp; the mood keeps on changing month to month &amp; year to year... well in my home Kenny G remembers to keep on coming to play in the background off &amp; on.. but now a days on the YouTube, Lindsey Stirling is giving tough competition to Yanni... ;)

Books? haha again so many...,like The Luciano Testament, Atlas Shrugged, Papilon, The Metrese circle, Man Watching, Oil, Death of the diamond, The dispaches, Bhagwat Gita, Jats, snow leopard, "Tao of Physics" I started but then lost the book.. if someone gets it for me I would be happy :)

One? This life has been amazing.. time and again-it never fails to amaze me one more time :))

Travelled many countries and many states in India in the era of no internet and no mobile phones... what an era that was- conversations were quality conversations with no distractions because if a ring or a msg on phone.. travellers used to form quality bonds as we needed each other for informations, for buddying up for a distance based on those conversations.. a different planet altogether..

Organising a Blood donation camp in memory of my brother where more than 23000 people gathered to donate blood in his memory ! We did not know at that time that it was more than the Guinness book of world records "record" - and that was not even the issue in our minds ! All the blood banks in National Capital Region of India were full (an area with population more than entire Canada's population) and since blood needs to be processed after donation and each blood Bank's capacity was reached, so they could not extract everyone's blood. There were emotional scenes with our people feeling cheated (who COULD NOT give blood) and it was real hard to convince our brothers to not try to jump que when it was announced that last of the 100 person's blood is possible to be collected. A truely incredible affection, loyalty, love,energy,tribute to brother's service to the people who had departed this world in a helicopter crash untimely at age of 58. (Ask me more about this event for humanity)

Giving speech to an audienceof 2,50,000 people (my highest ever apart from many at less gatherings)

Inspiring an entire city in a foreign country to feel and act positive and joyous (and stop feeling depressed and sad) at an event where about 80,000 residents had gathered in the capital of the country. Ask me about how I impromptu got myself fixed into a potentially embarrassing (and humiliating) situation- but with "belief in power of positivity and positive actions" not only avoided that but was successful in my endeavour :) God is Great !

And there are many others..

Some people become combative and competitive when hear some of my past actions.. please do not be, as I have not harmed you or anyone else... I just believe that God stands with you if you go for sheer positive actions selflessly and risk yourself/your reputation.. I am just a light hearted unassuming observer of life, of human spirit and the incredible feats human spirit achieves... and it gives me a glee and a glint in the eye when I see that happening.. when I see positivity winning against all odds- with others, with me, or with you :)

Our culture, our city and our experiences of life... and; our language- Hindi, you may practice your English with me.

Conversations on almost ANY topic of relevance. Inspiration ?! We all learn from each other.

Positive vibes, My experiences of life and my hospitality in return :)
Maybe some souvenir from India or a bottle of wine or allow me to treat you to a meal.

Also can teach you a bit of Hindi

Inspiration to be positive- if you need and ask for it.