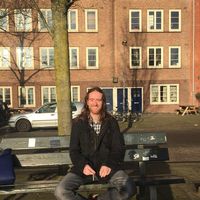 I'm laid back, and find it easy to get to know people quickly. I don't take myself or life too seriously. I think i can connect with most people on some level. I constantly learn and meet people that change my perspective on various things.

Used to go meets and hosted a lot in my home town, Paisley in 2013. I made many great friends and had nothing but positive experiences. I moved to Amsterdam later that year and continued to host.

Recently moved to Maastricht, so I hope to host again once i'm settled :)

I've stayed with a few guests over the years, and kept a lot of those friendships. Of course hosting throughout the years too. I have met many amazing people through cs!

I'm passionate about many things but have a fairly simple life, chilling with my friends and family as much as i can.
I enjoy deep discussions as much as having a laugh, and find it very easy to open up to people.

I love well made documentaries, countless series and pretty much any cartoon South Park, Rick and Morty etc.

Driving up the coast from LA to San Francisco, some of the most beautiful scenery I have ever witnessed outside of Scotland.

Plenty random things. Can help avoid the shitty coffeeshops, if that's your thing.

Sure much else to talk about though!

Enthusiastic chat and a couch :)