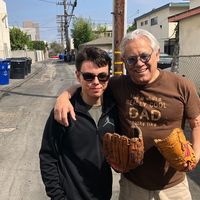 I have been hosting young backpackers and other travelers since 2008. I am sad to say I am no longer able to host couch surfers as my landlord is evicting me claiming I am hosting illegal subtenants. I will miss this international interface more than I can say, I love the concept of the shared community.

My house in Eureka has been destroyed by squatters and condemned by code compliance. It was occupied by 'tweakers' who were 'cooking' methamphetamine and is now contaminated with hazardous waste, so it is no longer available.

If you have been a guest in the past, you may still get in touch with me on WhatsApp and at net_democracy@yahoo.com

I was an Army brat and grew up in Japan (Nippon) during the occupation and various Army bases in Texas, Hawaii and Washington.

I was a US Navy musician, a teacher, parole agent, and internet activist, but the vocation I really enjoyed was working for supplemental (unscheduled charter) airlines as a flight attendant supervisor.

I've been hosting couch surfers since 2008; it's been mostly great, except for a few bad apples.

I won't be getting any more notifications from couch surfing.

When I was a young hippie (long before there was an internet) I traveled around the world looking for adventure, 'crashing' in caves, an abandoned sailboat in Tahiti, a windmill in the Netherlands, a lighthouse in Spain, castle ruins, a canal boatel in Amsterdam, a fishing boat on the Ganges in India, etc.

I met many kindred souls who would flash me the peace sign when they saw my long hair and offer me a place to "crash".

Couch surfing is a way for me to pay it forward and I gave priority to anyone who has hosted me in the past.

I also have 40 acres of rugged land in Shasta County near French Gulch and Whiskeytown, not far from Sutter's Mill where gold was first discovered in California. My Green Party Ecowarrior friends are reconnoitering to design an intentional community, living off the grid with earth sheltered communal housing.

Most of my guests have been wonderful people; honest, mature, responsible individuals and have received positive references.

I've had two bad experiences, one from a woman who claimed to be a Buddhist monk and demanded that I pick her up after waking me at 1 AM.

The worst was a German woman I felt sorry for because she arrived with no money and had no references. She was only supposed to stay for one day to find another host and overstayed for a week. She was hungry so I fed her and loaned her my bus pass, which she never returned. She became extremely hostile when I told her I had other couch surfers arriving. After she finally left, I discovered she had robbed me of my rent money while I was taking a shower. I notified couch surfing, so she won't be able to victimize anyone else.

I play baseball, bodysurf, ski and cycled the North Island of New Zealand. I have deluxe Scrabble, Monopoly and card games.

I won't be receiving any more notifications from couch surfing because of the new owners' policy requiring hosts to pay a fee. I provide this service to travelers although I rarely couch surf myself. The policy used to be that if you hosted three travelers no fee would be required.

I have always tried to practice a minimalist lifestyle and maintain a low carbon footprint. An ecowarrior, anti-establishmentarian, climate environmentalist politician. I am a Neo Marxist Revisionist (Marxism for the 21st century).

Sapiens and Homo Deus, Green Earth and The Ministry For The Future by Kim Stanley Robinson. Earth and Existence by David Brin. The Genius Plague by David Walton, Narcissus and Goldmund by Hermann Hesse, Brave New World by Aldous Huxley, Cat's Cradle by Kurt Vonnegut, Catch 22 by Joseph Heller, etc. I have been a beta reader for David Brin and David Walton.

In 1963, as a young Navy Seaman based at Anacostia Naval Air Station outside of Washington DC, my friend, John Louis Evans and I went to the Poor Peoples March on Washington for Jobs and Freedom to see Martin Luther King. It opened my eyes to racial inequality and oppression in the early days of the Civil Rights Movement. America still has a looong way to go to end the race and class struggle...

After the Navy I hitched to rock concerts and demonstrations all over the country; Kent State, the Battle in Seattle, Million Mom March, and every anti-Vietnam moratorium, etc.

I toured New Zealand on a bicycle in 1989 and 1990 and have backpacked in Europe, Turkey, Iran, Iran, Afghanistan, Pakistan, India, Indonesia, Australia, Tahiti, etc. I often crashed on floors and couches or slept in my bivouac sac wherever I ended up at night.

I've lived in caves in Matala, Crete and Formentera, Spain, stayed in a windmill, a lighthouse, a canal boat in Amsterdam, a boat on the Ganges, and occupied a sailboat abandoned by Joanne Woodward in Tahiti.

I was a Peacekeeper for Bernie Sanders at the Democratic National Convention in August 2016 and stayed in the basement of the Arch Memorial Church with other activists. I was very disappointed when Bernie sold out and supported Hillary Clinton instead of Jill Stein and rolled over again for the rigged primaries in 2020. That was when I realized Bernie, AOC and the fraud squad, were the controlled opposition.

My Facebook page has more travel pics. You can find them by searching for Jon Mann on Facebook
I haven't paid the $60 verification fee and am no longer a verified member on Couchsurfing. I don't agree with the new policy since I host much more than I couch surf.

I have been hosted in Spokane WA, San Jose, CA, Helsinki, Finland, and Dublin, Ireland where I attended World Science Conventions. I was also hosted in Bakersfield for the Green Party Assembly and in Salt Lake City for the Annual National Meeting with Jill Stein.