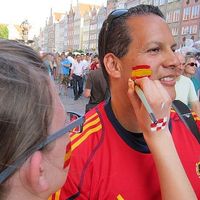 CURRENT MISSION - Enjoying life. Sorry I am on a massive travel schedule at the moment, so maybe I can host. I'm plotting some jaunts soon now that hopefully things open up, but WEAR a MASK!

Sharing experiences by making friends with people from all walks of life and through travel!------ Plus, I never met a good time I didn't like. I am preparing for my next journey, who wants to join me?

I have been traveling lately, so I might not be able to host you. Please note: Last minute requests are very difficult for me, so please request a few days in advance.

I have traveled a bit - extensively in parts of Africa/Europe/ Eastern, Europe the past 15+ years and now I have now been going to Latin America. I REALLY enjoy meeting new people and new places.

I also have a website, www.Gregoryawebb.com that contains additional information.

Party, drinks, good times? Did someone say any of these things?

I Recognize in You the Dream I've Always Dreamed... (La Boheme)

We only live once, so why not live!?!

I PARTICIPATE IN COUCHSURFING

I play host to people coming to New Mexico, attend CS events and I continue to meet new people throughout the world.

I've met up with lots of people, however I am no longer new to CouchSurfing. I typically have stayed in B and B's, hostels, or with locals during my travels. I surfed during every trip and met up with local CSers, attend CS events and I am looking forward to meeting new friends from all across the world. I have hosted CS gatherings and attend as many as I can during my trips.

Learning new things, experiencing life, seeing new parts of the world. I enjoy all types of music from jazz to rock, with everything in between. I enjoy cooking and drinking wine and spirits from all over of the world. I enjoy art, music, and sometimes people watching in cafes and bars. I live for live music and the arts.

All forms of music and books ranging from social justice to art to non-fiction books. I LOVE LIVE music.

Now that travel is starting to open up I have been to Colombia a few times, plus Peru and Costa Rica in 2022 and I just return from Malta. I have also found a fondness of Montreal and Quebec City and go on an annual pilgrimage to summer music festivals every year for the month of July. I was in Lebanon in 2019 and South America in 2017. In Europe for a few months in 2016, plus Thailand and Cambodia (2015)+ Brasil (Copa de Mundial 2014!) and Argentina. I was in the Amazon in Ecuador and spent time in Colombia. I was at EuroCup 2012, danced at Guca Music Festival in Serbia and I've trekked the Rare African Gorillas in Rwanda, been one of 200,000+ people at Live 8 in Roma, river-rafted the Source of the Nile in Jinja, Uganda, bungee-jumped/hot air ballooning in New Mexico, sky-dived in Arizona, and Run with the Bulls in Spain, along with other experiences. I went to the 2010 World Cup in South Africa and was lucky enough to go to the World Cup in Brasil in 2014.

My goal is to visit every continent and to see as many championship games or matches in EVERY sport- I've been to the World Series (Go Red Sox, Game 4 Sweep in 2007), the NBA Finals (Game 4 -Lakers v Celtics), the US Open Golf Tournament (Go Tiger Woods 2008 Champ) - I was at the NCAA basketball finals in Detroit - I was blessed that I was Barcelona June 30th and by sheer coincidence and lucky enough to have tickets to the U2 World Tour Kick Off concert. I was at multiple 2010 World Cup games including the Finals (Viva Espana!) in South Africa and was at the MLS Cup 2011 and 2012.I, along with 80,000+ people, danced to Stevie Wonder while he sang "Sign, Sealed, Delivered" during an amazing night at Obama's Acceptance Speech in Denver as a part of our LONG OVERDUE progress... Amazing experience. I marched in the Obama Inauguration Day Parade with AmeriCorps Alums.I have been to Broadway Shows in New York and I am a season subscriber to the Santa Fe Opera (so during opera season in Santa Fe let me know in advance and I might be able to get you tickets during your visit). I've also slept in a car outside Rome and seen the most amazing sunrise in my life...Everyday is the opportunity to make for a speacial and amazing day.I hope to run off to ???? in a couple of weeks, why you ask? Why not and just for the hell of it!

I have some knowledge of the Southwestern United States and of New Mexico.

The joy of living, travel stories, and laughs...