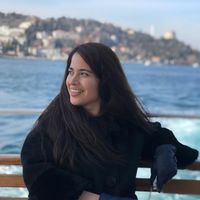 I like to experience different styles of food. I love road trips, I don't wear usually makeup and I like to dance... a lot. Easy going, organizer, adventurous, curious intelligent and beautiful couch surfer ha!.

As a host, I prefer to state "maybe hosting" that giving false hopes. ...and instead of inviting people to public places to see "if I host them", I do prefer to set place, time, rules, party-mood, etc. to give a better hint to whether I'm the right host for them.

As a surfer, I just follow the house rules and leave the place the same or better than it was before. Sometimes I feel I need a guide, sometimes I feel comfortable being independent. I’ll let you know.

I would recommend anyone to do both hosting and surfing, both are really fun and you get to understand better both sides!

What I like about CS is that you can meet a place through the eyes of a local, and realize you have an extended family all over the world. I've met many different and interesting people. I love to show my city or the city I'm living in. I like to exchange experiences, to chill out and/or to discuss a lot.

…just don’t be a psycho, go and use Tinder instead.

I love to read people's mind.

LP, The killers, RHCP, Billie Eilish, The Strokes, The Offsprings, Demi Lovato, Sia, Indie-rock, Electro-pop, Alternative-rock, British-pop, Emo-rock, Instrumental metal, any female singer with an awesome voice. 90s-2000s MTV hits... and everything that can be danced with Latin rhythms (this may or not include, salsa, tango, samba, reggaeton) or professional jazz, Arabic and Hawaiian.

The lobster, the notebook, Coraline... actually... my favorite movies genres are science fiction and horror-suspense... and when I want to relax, romantic comedies.

I was a ferocious reader of Issac Asimov´s, Ann Rice vampire books and J.K. Rowling Harry Potter's. ....but I have two favorite books: one that talks about science and microbiology, and the other one called Magali.

Travelling alone and knock into an Indian Family in the middle of the jungle who adopt me for 2 days to feed me because they thought I was too thin. ..... sleeping in the middle of the dessert, watching the milky way around smelly camels. .... coming back to my home town and realize how amazing it was... and how much potential to be exploited has.

I can share stupid stories from my past and love for history, architecture and culture.