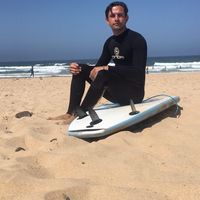 August 2022:
A new adventure.
Sorry for the lack of updates and don’t mind anything that says here, it needs rewriting 😁

AUGUST 2019:
After a few years filled with adventures I am finally settling down a bit. I am starting a degree course in September and I will probably be busy 7 days a week, either with college or cycling my way to my 2 different jobs.
For this reason, I will be less likely to host as many people as I would like. So please, take a minute and send a smashing request! Who knows, it might work :)
.
. Hi everyone. I am Nicolas. Born in Montevideo, Uruguay.
.
ABOUT ME
According to my references, I seem to be very relaxed and easygoing. For me, the most important is spending some time with my surfer or host and getting to know them and their lifestyle.
Be it just a chat at home, a full day hanging out, or anything in between.
CURRENT MISSION
After completing a FIRST mission called "Summer 2015 all year?", which involved quitting my job in advertising (in which I had been working since I was 18 years old) and going somewhere I like where it is warm in that moment to complete this check-list: Practise languages. Go on bike trips. Swim. Learn &amp; share the most... I went through a SECOND mission during the second half of 2015 and until the end of 2016, learning portuguese and working as a local person while living in Rio de Janeiro for just over a year. Then there was a THIRD mission: I landed in Dublin at the gate of the year 2017 for new adventures and also in an attempt of taking my english skills to a new level, which by mid 2018, I believe I have achieved. At this stage and having some new experiences under my belt, there won't be a fourth mission... But it is time for new adventures and I am going where my heart goes. UPDATE. October 2018: I spent 5 wonderful summer months while travelling 1 month through France and living in Barcelona. Now moving back to Dublin.

I have met a lot of kind and interesting people thanks to CS from whom I have discovered so many things I would not have otherwise. I just thought I would like to do my bit to keep it going.

Cycling. Gym. Surfing. Swimming. Hiking. Travelling (the obvious one). Languages. Geography. Playing house music. Having a cup of tea. Also having a glass of wine. Lazing around. Music of all kinds in general. Also any other things not mentioned here. And learning something new is always interesting.

To have learnt to swim.

Always ready for it!

It will always be nice for me to share time together in any activity you like. I am curious, enthusiastic and outgoing, but most of all I am interested in getting to know more about you and the way you normally spend your time.
After I left home I have learnt to cook some great stuff, so I can share this as well. And of course you can always count on my help for anything you need.