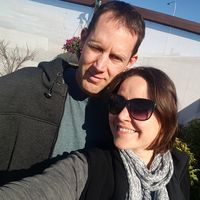 Got on before solo trip around Spain. Ended up not using but would like to.in future.

Happy to share info about Wellington and NZ. Would be open to language exchange.