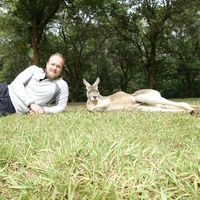 UPDATE: So I was actually against paying for the survival of CS, since it's really against the idea from the beginning - and I've been here a loooong time. But... I caved in. That's why my response rate is sooo low right now. I simply haven't been able to answer due to the paywall.

Other than that, not so much to write - my references and experience on this site speaks for itself.

That sounded arrogant? Well that wasn't the intention - but I do know how to treat people as a host and as a surfer, that's for sure.

I absolutely love getting the CS-experience instead of the ordinary when traveling!

You're here - you know it too. We're here for the same reason. It makes sense.

I've done quite a lot. Still not enough - but I'm getting there.

Myself - and probably some stories that'll make you giggle just a little bit!