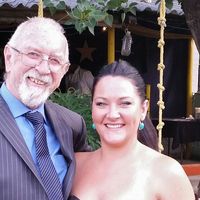 After I stopped project management on civil engineering projects in UK, South Africa and several East African Countries my wife and I bought a Nursery School in Johannesburg, which we managed until she died in 2013. We traveled the world extensively and after my retirement I have continued to spend 6 months traveling.

I enjoy meeting people from other countries and cultures

I have delivered a baby singlehandedly on 2 separate occasions and in neither case was it my wife although I was present with the birth of my 3 children which helped to know what to do! Climbed Mount Kenya when I was much younger! Participated in the World Public Speaking Competition in San Diego. Walked sections of the Camino in Spain 3 times. Cycled the Otago railway route New Zealand. Team leader for the first group of young artisans attending the IVTO "olympics" in Taipei.
Visited Machu Pichu, Taj Mahal, Angkor Wat, Sydney Opera House, Franz Joseph Glacier, Golden Temple, Victoria Falls, Niagra and Iguazu Falls, Wailing Wall, Great Barrier Reef, Uluru, Demilitarized Zone in Korea, and many more
Even visited Easter Island one of the remotest inhabited islands in the world. Nearest habitation 2075km away Pitcairn Islands and 3512km from Chile. Spent time north of the Arctic Circle mid winter.