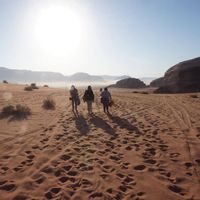 I was working an living for a time in the south of Germany after I came back living and working a year in Jordan. I am looking forward to start my masters soon so deciding between cities and countries and master programmes Im trying to make some time for travelling now, meeting people, getting to know new places.

I have various interests such as ...societies, music, politics, history and most of all people :-)

Somehow I never really ended up couch surfing at some couchsurfers place but rather met people through friends and while I was travelling and then ended up sleeping over at their places, however I still check couchsurfng.com and take part in couchsurfers events from time to time.

I like the concept of couch surfing because it allows everybody to travel based on everybodies hospitality. It makes people meet who might have never met in another way, helps with the budget and so again makes it almost possible for everybody to travel.