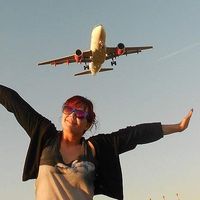 UPDATE 2016: at the moment im in the airforce, so l cant host anyone.

To find a mission! Travel to southamerica and live abroad!

If I should describe myself from nationalities, I would consider myself as being South American: passionate, intense and warm.
And
Aussie: silly, laid back, crazy and funny.

I'm the one u meet on the dancefloor doing my silly dancing with the victim that I found because it's okay NOT to get drunk before u dance and because it DOESNT have to look sexy but everything else!

I love doing sports. Especially karate, running and badminton. Karate has been a big part of my life, and I once won the danish championship.
I love animals, so I don't eat them but defend their rights in my country and abroad as a volunteer.

I come from a country which is having a battle with the Netherlands about having most bikes and fastest bikers, and a country that is beaten by the UK when it comes to drink most beers and get drunk the most.
We are also considered being the most happy people on earth (how u do count that and put that into a scale, I dont know).
U guessed where I come from? Great!

I am vegetarian!
No, I don't eat meat
Yes, fish and chicken are animals
No, my shoes aren't leather
Yes, I get all the vitamins I need
No, I don't need meat to survive
Yes, I receive plenty of calcium
No, my teeths weren't made to rip flesh
Yes, I still have a life! (:

Live and let live!
U only live once, but if u do it right, once is enough.
Why wanna become someone else when u can be urself?
3 keywords for My life is happiness, love and traveling!

Bear Grylls is a man after my head! If u can find a man like him, I wanna get married to that guy!

Daddy Yankee an Hispanic reggaeton singer. In general I love all kind of Spanish music.

Tina Dickow a danish singer. It took me years to find out that she has one of the best voices I've heard.

Maison martin margiela is an Belgian designer who designs clothes that looks unfinished - I love that!

Gwen Stefani has an awesome style! It's raw, classic, rock and chic. And then she is just the definition of how a very beautiful woman looks like. She rocks!

Seen a baby born
Warching the stars in an airplane from 11000 during nighttime... It was ABSOLUTELY AMAZING!
Joining the Danish air force to become a soldier and become a vegetarian is on my top 3!

A bike ride around my city Copenhagen or malmö.
Eating out.
Go to events.