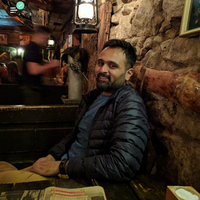 Let me tell you a story..

They say: "travelling is one experience where the more you spend, the richer you become". Well said.

But then, it doesn't hurt to save that additional couch money to indulge in stuff that makes travelling more fun. Tha Bungee jumping in Queenstown, the sophisticated French restaurant (Redundant phrase i know :), taking a flight instead of a bus.

So yeah, as an avid traveller am more than willing to throw open my pad to any travellers coming down.

And maybe one day, somebody else can reciprocate when i travel. Its one vicious circle that you want to be part of. :)

Well, As of now I've hosted couch surfers from Norway, France, UK. This is ofcourse apart from the regular stream of domestic visitors which ensures that my house seems like a transit zone all the time. Not that i mind it one bit.

Oh Well, at the risk of stereotyping myself, well its actually the normal things in life that engage me no end. Be it books, traveling, Running, Movies.. And how can i forget, am a foodaholic to the core

Books: JD Salinger, PG Wodehouse, Sherlock Holmes, Hitchikers......, Roald Dahl, Calvin&amp; Hobbes... Am clearly a fiction boy with Bartemius,Jeeves, Tintin, Super Commando Dhruv and Holmes fighting for the top spot... Am grateful to these characters for being there during my formative years...

Music.. An unabashed Michael Jackson Fan. He was after all my first English cassette... Ofcourse Oasis, Green Day, Bread are right up there..

Food... Lets just say when i get up from a dinner with friends, all i can see are their eyes glowing with pride.... Some say its hunger but you know better...

Standing alone at the Punakaki beach in New Zealand with streams meeting the vast pacific ocean, I realized the world is so small, time is so less and theres miles to go...