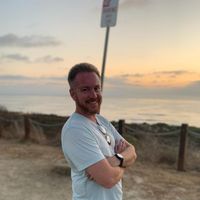 Meet new people from around the globe and livin' life!

Born and raised on Long Island, NY. Moved to San Diego over 14 years ago to escape the cold, snow, and enjoy year round near perfect weather and beaches. I consider myself a pretty laid back and fun loving guy. I live alone in a one bedroom apartment in a gorgeous condo (see My Home). I have two ball pythons (Laurel and Hardy).

Be a good person and don't be a dick.

I've been on CouchSurfing for over seven years now and love it. I heard of it through my buddy Jeff, and through him, I met some really awesome people that he hosted. The reason I really got into it and wanted to participate in this wonderful community is because I was planning a trip across Europe. I felt the need to do my part by hosting surfers first before I went on my own journey. I've met and hosted a lot of great people, and I'm happy to call many of them my friends.

I began my three and a half month adventure across Europe from mid January to early May. I have to say it was one of the greatest experiences of my life! Not only were the places I got to see amazing, but the people I met along the way were so warm and wonderful. I even got to see and stay with many of the people I hosted before my travels. I am so grateful to everyone I met and having had this perhaps once in a lifetime opportunity.

With regards to hosting people now, I am pretty much only available on the weekends as I'm quite busy during the week. I'm typically free early afternoon on Fridays through Sunday. I reply to every message I receive, but sometimes it may take me a few days. I'm cool with either last minute or very advanced notice. Please send actual requests, not just a message.

Thanks for reading and safe travels!

Movies (so many of them in no particular order):

Anything by Chuck Palahniuk, All the Girl with the Dragon Tattoo books, others.

Rather than one, a few amazing things I've done:

Toured the US with a punk band, skydived twice, and a trip throughout Europe for 3.5 months!

I can share my thoughts, beliefs, and experiences with hosts. Also, why not share some drinks, food, and fun while we're at it! =)