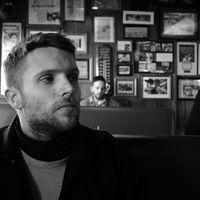 - Sunrise at the Bayan Temple, Angkor, Cambodia.
- A man on a penny farthing bike being chased by a pack of stray dogs, Izmir.
- Geisha trotting through the backstreets of night-time Kyoto.
- Al Green preaching Gospel at the Memphis Tabernacle Church.
- The mosque/ minaret skyline of Sultanahmet from a motorcycle in Istanbul.
- Cliff divers in Acapulco.
- A Japanese Macaque stealing a pensioner's walking stick at the Jigokudani hot springs.
- Thousands of Cacti offering me a hug at sunset in the Joshua Tree National Park.
- Lenin's corpse and winter in Moscow.

- Organised a stand-up comedy night that raised £4100 for Amnesty International.
- Got kicked out of a food hygiene class for wiping down one of the surfaces with raw chicken.
- Camped in the Sahara desert with only the starry night sky for a blanket.
- Studied a 4-week course at a Thai massage school in Chiang Mai.
- Completed ten days of 'noble silence' at a Vipassana meditation course in rural California.
- Bludgeoned fence posts into the cold, hard dirt on an organic farm in Tennessee.
- Shared a 3rd class carriage with around 40 Russian soldiers for 7 days from Moscow to Vladivostok.
- Learned Krav Maga from an ex-carabinieri with a gun fetish.
- Taught English and Geography to Peruvian children in an isolated Andean orphanage.
- Endured a week of being punched, stabbed and choked for the Kalah Instructor's course in Prague.
- Photographed the drunken Pagan freaks of the Vevcani carnival, Macedonia.
- Hitch-hiked over the border from Bulgaria to Turkey.
- Heard the Eureka sand dunes 'sing' in Death Valley.
- Spent an entire night swinging from the top bunk and farting on a snoring Spaniard's head on a night train from Sevilla - Barcelona.

I can teach you how to kill a man armed only with a spoon, a toothpick and a handgun