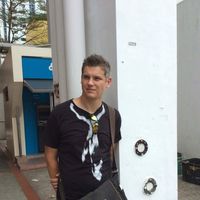 To visit as many places I can in the world.

I always love to meet new people and having a good time with them :-)

I want to see as much I can of the world.

I would love to host guests at my couch, but I think my roomates wouldn't like it ;-)But of course we can go for a tour in the City, a coffee or anything else.

Tons of interests... But most important, meeting nice people all around the world! Others are: Music (mostly rock), Video Games, football and so on.