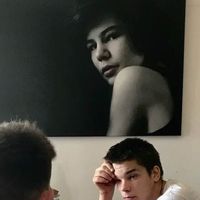 I'm 20 years old, I'm stationed in Belgrade and im currently studying at university of fine arts. Im always happy to meet new people and I'm alway up for hosting anyone with a good will.

I'd say it's a lot more fun than usual traveling methods, yet i probably wouldn't be aware of it if I could afford a normal vacation.

Everything I'm into is bound to interaction with other people and the world around me.

I know this is probably the most original answer to this question, but I listen almost everything, an I'm usually not the hater so I can stand the music im not into if it's necessary. I didn't read a lot in past few years, yet I like Tolkien a lot, and 19th and 20th century literature. Last book I've read was "state ideological apparatuses" by Louis Altiser which opened some new views for me... About the movies I can talk whole day so in summary I like 20th century new wave, some contemporary directors like Harmony Corinne, Lars Von Trier, some Serbian movies from last 20 years and one of my favourite movies of all time is "Dog's tooth" ...

It's hard to chose one, but I've been in some caves where few people crossed before me, and I took part in organising illegal gig in response to governments hypocritical covid-19 restrictions. Most of you will probably think that it was selfish and dangerous but just few days before we organised a gig the government organised a ceremonial opening of the new square in downtown Belgrade which was attended by over 2 thousand people while restrictions were siezed to like 5 people in groups... There was less than 50 people attending the gig in the open space and more than 200 cops surrounding us...we were in every news paper regarded as the enemies of general well being and usurpers of the sunday evening peace. Some of us were fined for "playing the cultural and artistic piece in the public space". Yes we were fined for contributing to urban culture in downtown Belgrade.

I really don't know what to type in here

I know to cook well for an amateur, i can clean do some house work and I can draw a pretty little flower for you