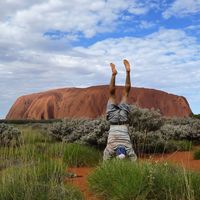 I have been back in France for 3 years now. I have left France for 4 years and have lived 2 years in Australia, 1 year in New Zealand and traveled through South East Asia. I now live in a small town in the north east part of France near Nancy and Strasbourg.

I like good movies ( What does he mean by GOOD movies ??!... an old Western movie played by Clint Eastwood or a mafia movie with De Niro, Al Pacino, Joe Pesci...)

I'm very considerate and respectful toward people in regards to their culture, religion, privacy.
I guess I'm attracted by different cultures, people coming from different countries, the unknown is quite exciting.

As a French person I like food of course, enjoy good wine and laughters.

What doesn't kill you, makes you stronger!
Nothing comes easy!

In this world my friend there's 2 kinds of people: Those with loaded guns and those who dig. You dig!

I join events lile Bbq, weekly drinks, Cs meetings, language exchanges or meet travelers to hang out with, have a drink, a chat, visit a place.

I planned on visiting a National Park named Kakadu in the north of Australia and was in touch with a Cs person named Stephanie. As my plans changed last moment because of a job that had to start earlier, I let Stephanie know that I couldn't make the trip we planned together but we could meet up anyway. So we did and baked some crepes for our dinner and as the time was flying by quickly and I was actually supposed to sleep in my car which was fully equipped to do so, I honestly think that she freaked out thinking that somebody could sleep in his car. As she had a spare bed in her flat, she ended up inviting me to stay overnigt.
Steph and I have been friends now for nearly 4 years.

I like to cook( I've graduated in cook).
I Like doing sport, traveling, discovering new things, places, cultures and people.
I like to relax with a movie or a drink.
I like Naturopathy, the power of plants as well as the power of nutrition on our body and mental health.

I have met some people from Couchsurfing (lol).
I drove my parents'car without asking them and without having the driving license when I was 16 years old. Everything was fine, I parked the car back at the same place in pushing it on the last meters to not wake up my parents. I went back peacefully into bed and slept like an innocent baby. A few hours after my father stormed into my bedroom yelling at me that I drove the car and the neighboor snitched on me.

Moral of the story: No no... that is not don't drive your parent's car without being allowed to do so..

The real moral is actually: Be very careful choosing your neighboors!

I can help you with cooking, French language or even English if you are beginner.
I want to share drinks, travels, backpacker's stories , food, conversations and of course let's share all the tragedies together.