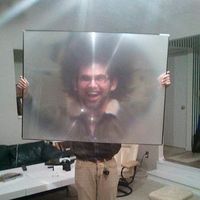 I want to meet new people and learn how they live in the world.

A great conversation is one where you find yourself arguing passionately about something you've never even had to think about before. It's the kind of conversation I live for.
I'm currently taking a break from school as I work on redirecting my interests. One time, I convinced a friend to switch from studying film to mathematics in about an hour. Maybe our aspirations are more fragile than we really think sometimes?

I'm about to start a WWOOFing expedition (organic farming) for two months in Israel, so for now I can only come to CS meetups if I'm in the area. As soon as I settle down though, my couch will have your name on it.

A friend and I took a road trip around the US in 2010 and we stayed with a few awesome CS folks. We had an fantastic time meeting great people and seeing cool stuff all the way between San Francisco, CA and Charleston, SC.

Food. Cooking it, growing it, transporting it.
Energy. Making it, transforming it, using it responsibly.
History. It helps to know where you come from if you're trying to figure out where to go.
Language. I don't want the whole world to speak the same one, but I do want us to try harder to understand the world through the eyes and ears of others.

I love discovering new music. I tend to listen to a wide variety of things like electronic downtempo, electro synth, traditional Balkan, Bollywood hits, klezmer, and instrumental funk jazz. And I think Kurt Vonnegut was a modern-day prophet.

Stood at the top of a mountain in the Negev in Israel on the clearest day. All I could hear was wind, all I could see was miles of desert. Time stopped.

I can cook for you the best shakshuka you will ever eat.